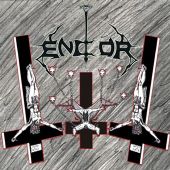 I always though that Endor was a planet in the Star Wars world (I am actually a closet Trekkie instead) but it turns out that was only one definition. Endor is actually a brutally nasty Death Metal act based in Holland and there is no Luke Skywalker or Ewoks associated with them in any way.

This Dutch three piece plays Death Metal that has been thoroughly stripped down to its foundations and thrown at you kind of like early Black Metal and some Hardcore was back in the 80's. Straight ahead and as relentless as a huge school of piranha against a bleeding baby wildebeest caught in the waters. The band has the right idea, but I think that they did not stop and hear that idea in its entirety before acting on it

Tracks like the merciless attack of 'Suffer' to the bare explosion of 'This World Is Ours' are pretty good outings, and hold promise but the shitty way everything was recorded took a promising but average album down to an below par and bad sounding outing. Very tinny sounding, weak and hard to listen to through the muffled effect of the album, the album never seem to go anywhere and just simply comes across as amateurish in ever category.

This album was completely ill-conceived and badly developed. It was a tragically disappointing album from the get go. It seems like they might have more talent that what was used in the thirty minutes that the CD plays for because I am pondering weather to ask for my half hour of life back - and perhaps an hour extra for punitive damages. I think Endor should give back the name to the Star Wars universe and decide to go into breeding slugs for a living.