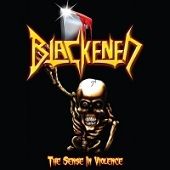 I remember the Thrash scene of the 80's and how that small part of metal history had ended up shaping and forming my life into being a musician, writer and critic. Now that there is a new Thrash movement that has come out with bands popping up everywhere on the globe, I have to smile. I feel as if... I have been rejuvenated.

Australian based Blackened (named after a certain Metallica tune) has released a demo of three Thrash songs. Sounding closer to early Slayer or even early Testament than the boys from San Fran they have lovingly named their band from, they have taken all of the original sound and power of Thrash, and breathed new life into it. There is no reinventing of the wheel here as it is straight forward heavy and large as the original Thrash was, yet there is this overwhelming feeling of it being new and alive - it is as if Thrash been reborn, strengthened and then unleashed.

You would think only three songs on a demo would not make a mark or have enough to make its point - you're dead wrong. With traditional metal power, strong Melodic Thrash riffs coupled with on purpose rough recording values... this demo eats and breaths the very soul for metal. Only bad spot I could point out is that sometimes the vocals get muddied in the mix, but that actually works in some parts.

Yes, there is room for improvement for these thrashing Aussies, but not by much. The more they stick to the old school of Thrash, the better they get as they have revived this style, and then made it their own without changing very much. With great material, you can never fuck it up, unless your some spaz band that can’t get it together. Blackened are not in any way ‘spazes’.