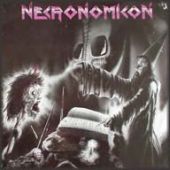 Sometimes it’s a tough job to write a review, because one is confronted with an album that simply does not work. Although the band uses all elements it needs to pen a satisfying work, something is missing. Necronomicon’s Apocalyptic Nightmare is one of those outputs. Yes, there are rasping guitars and a proper degree of velocity. Moreover, I cannot identify technical flaws (don’t expect any form of Sodom-esque or old Kreator-like rumbling) and the lead vocalist does not do a bad job, although he lacks individuality and sounds like the little brother of Destruction’s Schmier.

The problem is that all these details have no relevance whenever a band is not able to put them together cleverly and make a good song out of it. Apocalyptic Nightmare was the second full-length of the combo, but Necronomicon’s song-writing skills were still alarmingly weak. All tracks pass by without triggering the wish to listen to them again. Already the opener simply forgets to draw the listener into the album. It’s not the biggest pain in the ass to consume the seven songs, by far not. But it’s shocking that an album full of riffs and high speed rhythms can leave such a feeble overall impression. Okay, the chorus of 'In Memory' with its slightly hardcore-influenced background shouts keeps sticking in the ear, but that’s all and that’s not much, to express it politely.

Necronomicon never stood on the sunny side of life. Mostly they received negative reviews in the German media of the eighties and not at least because of this fact I felt certain sympathy for them. Nonetheless, now I must admit that these reviews did not happen by chance. The four dudes string together a million riffs, but at the end of the day, everything is going nowhere. Obviously, the band sits between the two stools. On the one hand, their material is too straight to fascinate those maniacs who love it to listen to progressive and / or academic sounds. On the other hand, the songs do not have the power to make the underground smile sadistically. The integrity of the line-up is beyond doubt, but that’s not enough to catch the attention of the listener for a long time. The same goes for the production. I cannot say anything bad about it, but its quality doesn’t matter in view of the deficiencies of the songs.

Probably the quartet became the victim of its own ambitions. The overlong songs paint a heterogeneous picture and maybe the stupid artwork mirrors the compositional flaws involuntarily. What does the magician do with an impaled head? Why is this scene witnessed by an oversized skull? In short, the cover is ridiculous. And although this is not the word I want to use to describe the seven songs of Apocalyptic Nightmare, I understand very well why this work fell on deaf ears.