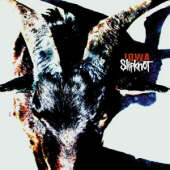 Blowing up big last year, Slipknot had a lot to prove to many different people with this album. Hard task if you ask me and, for the most part, Slipknot have done a pretty good job with making a bona fide metal cd. "Iowa" is an overall dark album with nonstop aggression and a lot to owe to Slayer, Morbid Angel, and Sepultura's "Roots". One would be deaf not to hear these influences shining through the thick layers of percussion and downtuned guitars, but they are definitely there.

Like their previous self titled release this cd has its strengths and weaknesses. On this record the band have taken out pretty much all of the hip hop influences with only a few dj scratches and 'Spit It Out' type rhyming schemes which actually surface. It is very apparent right from the start of this disc with the intro '(515)' that Slipknot were hell-bent on making a really heavy metal record. The result is definitely not the best metal ever recorded, but it does do its job of pretty much being pure rage throughout the whole running time with the long and boring final track, 'Iowa', as the exception to this.

The best way to review this disc is to take look at its improvements and strengths and also point out its weaknesses and things that need to be worked on. The most noticeable things which have been improved upon since the last record are the guitar riffs. On "Slipknot" very little riffs were memorable and they were way too spread out between the juvenile hip hop styles of songs like 'No Life'. Now the guitarists seem to be more comfortable in their playing and their actual talent shines through much better than it did before. Another improvement are the vocals. Not being a huge fan of them still, they have gotten a hell of a lot better which is something which just simply cannot be denied. The drumming on this release is constantly solid, which is something we come to expect from drummer Joey so that was pretty much a sure thing right from the start. Lastly, the production is a little bit better as well and you can actually pick out the bass parts if you want and everything is given a much fatter sound.

Now for the weaknesses, and I am sure that even some of the band's fans will be able to agree with me on some of these points. First off, this cd suffers from some of the worst lyrics I have ever read in my life. The song 'Disasterpiece' is one of the worst victims of this when the death metal style chorus kicks in. I find it incredible that someone could actually sit down, write "People make noises when they're sick," and think "...hmm wow those lyrics kick ass!" Lyrics like that are almost unforgivable. This cd also suffers from giving you a killer intro, picking you up, but then giving you nothing and this would not upset me if you weren't happening in almost every song. Songs like 'New Abortion' and 'Skin Ticket' come in strong with killer death and thrash styled intros but then lead you into mid-tempo verse lines which do not fit together at all and make the track seem disjointed.

Overall "Iowa" is a stronger and much much more heavier release than their previous effort. I feel Slipknot still have a ways to go in terms of making an excellent all out metal record, but I do have faith in these guys and their potential. This record proves they that they have what it takes to stick around and hopefully they will be able to work out their little bugs because this guys have a unique style but it still feels like they are holding back. So as far as being metal, yes they most certainly are, but as far as being good metal, they still have a little ways to go.

Bottom Line: Slipknot fans should already have this but for you skeptical metalheads, you may want to give it a shot but consider my words above before heading out to the store.