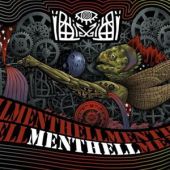 Black Metal as of late, has been one of the styles of metal that seems to have split into many subgenres and even subs of them as well. Each one of those genres seemingly being a completely single entity while still keeping strong roots to the base genre. Poland’s Iblis (the Muslim equivalent of the Devil) is a band that has spread the boundaries of Black Metal further and further until it is about to break and crumble.

Playing what they're calling ‘Nuklear Rock’n’Roll’, Iblis would be better described as playing a real dark version of Avant Guard Black Metal with touches of Psychedelic thrown in to make it even more unusual yet compelling. Powerful, brooding and on the edge of being completely psychotic, they really do take your very mind on one hell of a little mind warping trip.

Brutally heavy with this disjointed kind of style, Iblis nails you to the wall with its sound. Tracks like the haunting title track and the bizarre yet macabre 'Don’t Eat My Legs' show a decent into the darkened vortex of madness through the haunting and beguiling vocals that reminds me of King Diamond, but the voice is without the range. Every one of these musicians are the most stellar kind, as they show such progressive arrangements while keeping a heavy and biting power to it, never once letting up, creating a picture in music that could very well scare even the strong into lunacy.

If you are into more of the modern Black Metal sounds, this album might not be your thing to hear. If your into something that is heavy, inspired yet seems to be the Muzak choice for an insane asylum, listen to Iblis. It just may drive you off the deep end, into that pit of horror and torment of a mind lost. Dr Freud would be afraid of this band and all of his work could not cure the madness.