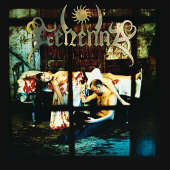 The story of Gehenna is a sad one. They had an almost perfect start with the atmospherically outstanding First Spell, the Second Spell was also very convincing and they reached their peak with Malice. But the higher they climb, the harder they fall. Gehenna stumbled into a seemingly endless period of disorientation and released albums no one (or at least no follower from Gehenna’s first hour) wanted to hear from this band. Adimiron Black had the burden to be the direct successor of Malice. A thankless position, no doubt about it. Yet this is not the only reason why the album left me slightly disappointed.

First of all, the five-piece sets the focus on brutality. Generally speaking, this is no mistake. But in the case of Gehenna, this approach is at the expense of spirit, atmosphere and integrity. The opener starts with an explosion. It seems that the band wants to blow up the whole length of the Great Wall of China. The detonation sets the signal for the following material. Of course, already the first two full-lengths had left the debut’s path of total desperation. But here you will not find tracks that run in the vein of 'A Witch Is Born' or 'Bleeding The Blue Flame' either. Instead, a song like 'Deadlights' concentrates on massive force (but simultaneously it suffers from unsuitable breaks). The big picture of the song is okay, but it cannot hold a candle to the material of Malice.

The longer I look at the cover, the more I think that Gehenna wanted to break the chains of the initial second wave black metal sound. They spat on its aesthetics and presented a bloodthirsty artwork which actually was reserved for a (porn) grindcore horde. I admit that already this idiotic picture made and still makes it difficult for me to love the album wholeheartedly. Nevertheless, there are some tracks that prove Gehenna’s compositional skills. For example, the title track delivers a pretty catchy chorus and coherent riffing. 'Devil’s Work' is less furious than the remaining songs and builds a last bridge to the early songs of the Norwegians. The guitar lines possess a fatalistic touch and the drummer does not shy away from intense double bass driven sequences. At the end of the song, the keyboards gain the upper hand and create a rare moment of atmospheric density. By the way, they do not have a main role on this album, because the noisy production puts the focus on the lumpy guitar sound. It lacks sharpness and directness. The result is a mediocre production that does not generate a special aura.

Adimiron Black is no album one should completely ignore. Nevertheless, even with a playtime of less than 37 minutes, it seems too long and too confused, because it remains a mystery what the album wants to be. A black metal work? A bastard of black and death metal? An album beyond all categories that just wants to impress with the (regrettable) evolution of its spiritual fathers? From my point of view, it was just Gehenna’s first step down the ladder - and it was a big one.