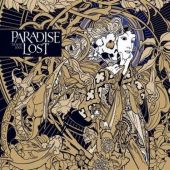 Type: Full-Length
Release Date: 2012
Label: Century Media Records
Genre: Doom, Gothic
1 Solitary One
2 Crucify
3 Fear Of Impending Hell
4 Honesty In Death
5 Theories From Another World
6 In This We Dwell
7 To The Darkness
8 Tragic Idol
9 Worth Fighting For
10 The Glorious End
11 Ending Through Changes
12 Never Take Me Alive (Spear Of Destiny Cover)
MetalBite on YouTube

The new Paradise Lost blooms with quality Doom throughout its entire excellent running length. There is a very urgent nature to these songs despite falling within this genre. Although very similar to a band like My Dying Bride in sound, they are the complete opposite in speed.

These are some of the fastest Doom songs I’ve heard and it gives the songs an engrossing aura that is impossible to become dissociated with. The first few tracks 'Solitary One', 'Crucify' and 'Fear Of Impending Hell' set the stage for an absolute gem of Doom Metal material. The somewhat “Gothic” flavour of classics the same named "Gothic" can be found here to some extent as well and it makes for an album that has a solid atmosphere to go along with its rollicking nature as seen from the standout title track, for example. There is nary a weak moment to be found on the "Tragic Idol", but one could argue there could be a few more spectacular ones as well. The overall sound is more energetic than what recent output by the likes of Anathema and Katatonia have shown, but it’s a very different sounding record as well. I would actually put the band’s sound on "Tragic Idol" closer to something like Cathedral or Candlemass, but there is still a singular nature to Paradise Lost’s sound.

This album is one that will make the forefathers of the Doom genre proud, regardless, even though it has nice modern production job to boot. The songs have a crisp sound that makes them breathe with vibrancy throughout. All in all, this is a quality Doom Metal album that has an accessible that it will appeal to all metal fans. "Tragic Idol" is an early contender for heavy metal album for the year.