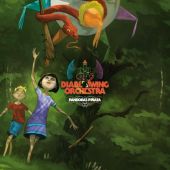 This is a wild and interesting adventure of an album that evokes the cover art of a jungle type atmosphere with a variety of vibrant colours within the songs themselves. The structures here are of a similar crazy nature to those of a band like Mr. Bungle or what was seen from the recent Sigh opus. It’s not traditional because the songs don’t often have verse and chorus sections that repeat, but go off on different tangents. The song-writing is still relatively tight throughout, though some sections are more memorable and work better than others.

The slight lack of consistency is what prevents this from being an absolute gem of an album, but it’s still excellent nonetheless. If the quality of the album standout 'Exit Strategy Of A Wrecking Ball' was upheld throughout the entire length of the work it would have been greater. That particular song busts out of the gate with a very powerful nature and manage to be a rollicking good time for the entire length. Some of the other songs become too silly at times to ever be as solid as that one. The majority of the album is still an amazingly fun time. The first few tracks are amongst the best on here and set the stage for an album that starts to wander into many different territories throughout. There are many different instruments used to give it this sound like it was created in the jungle. There are also a number of vocal choices ranging from singing to chanting to operatic vocals.

Overall, the originality and energy of this album is what makes "Pandora’s Pinata" worthwhile for fans of Avant-Garde music in general to check out.