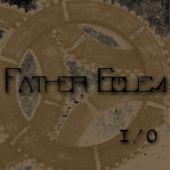 It seems to me from time to time that Progressive Metal comes at me in waves. I have a few Prog Metal acts waiting for my off-beat way of looking at music in a pile on my desk. That means I have to get going, I guess. From the wonderful country of Spain, comes Father Golem - an act that has had some great acclaim thrown at them.

Born when members of the Spanish metal band Bajo Zero (not the ‘Bajo Zero’ from Venezuela) decided to go about things a little different. Going more for a Progressive style with some metal links, they released two other albums that were well received by critics and metalheads alike. They then brought out the album, "I/O", to light.

Mixing in some Jazz, and using a string quartet and other instruments, they push the envelope of Progressive to its breaking point while adding in a good healthy dose of metal as well. Sounds interesting in the surface, yet in many spots it is very confusing and loses the momentum they have made. In the crush of trying to expand their musical envelope, they loose connection with the listener and what they are doing. Even seasoned musicians (I am of many years) do lose interest due to the over playing and over thinking of the music that Father Golem does.

This album will appeal only to the hard-core musicians and very jaded journalists but will alienate the bulk of the scene out there. They have this massive amount of talent that literally oozes everywhere so a little more ‘simplified’ version of themselves along with a straight ahead attack would go a long way. I don’t mean a full dive into the pool of mediocre metal, just a tweak that will bring the masses their way. It is a good album, but unreachable for most.