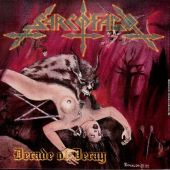 One of the greatest exports from Brazil comes by way of one of the most influential assemblages in the underground pantheon of black thrash metal. Sarcofago has seen its influence in every corner of the world; from Norway to California, these Brazilian guys have taken the art form of lo-fi simplicity and made it all the more important and enlightening for the salivating masses some 25-years later. As I might personally attest, pre-Internet, finding any physical copies of any Sarcofago records years ago was absolutely impossible, and such is just one of the wonders of the ‘net that these albums found their way into my greedy hands over the last few years. For those among us not familiar with the sound of Sarcofago, fear not, as Decade of Decay is the absolute perfect place to begin with thanks to Grayhaze Records striking a deal with Brazil’s Cogumelo Records for U.S. distribution.

Sarcofago, in the basest terms, is a childhood nightmare come to roost in your head as you revisit all of the sociopathic ideas you once thought lost to time and reason; you’ll quickly note that not all of these emotions are easily dismissed when prompted by the right musical stimuli.

Originally released in 1995 in near-impossible-to-find numbers, Decade delves deep into the din of darkness with a myriad of tracks indicative of the band’s incredible output since the mid-80’s. Finally seeing a reissue, this album is a must-own for those unfamiliar with the band’s actual sound but steeped in the current black thrash movement - there is no other band save for Venom, Bathory or Celtic Frost that can lay claim to this style and, sadly, the Brazilian horde is often overlooked by the larger, more commercial milieu. The fantastic thing about this collective is that every facet of the band’s history is represented to the absolute best degree; there was no picking soft, accessible tunes for this foray. To firmly grasp and understand the fury that is Sarcofago, it is always best to tap the best that the band offers, and these tracks are the epitome of that.

From the influences of Slayer in “Screeches from the Silence” to the undeniable Venom shadows of “Nightmare” or “Satanic Lust”, there is no copycat lifting involved here; the music is allowed to stand within its own shade, with every particle of the band’s sound covered. When you hear Sarcofago, you will almost immediately hear any of the main players of the mid-80’s era that dedicated themselves to the underground movement of Satanic-themed thrash metal, and this usually comes around the The Laws of Scourge era from ’91. This sound also employed some generous death metal elements more geographically rooted in the States as opposed to Sweden or Germany from this period, and it was very potent. The trek backwards through the record from the first track down is interesting in itself. The album begins with the then-latest record in Hate from 1994 and moves hauntingly down the spectrum, like a recluse spider seeking the darkest corners of the environment. It’s also good to hear Sarcofago at its sonic ‘best’ in terms of production and mixing, and while this takes nothing away from the cultivated sound they made famous, it does let you enjoy the music to its absolute pinnacle. That said you can also see the ‘digression’ as it is; that is, you see the more polished Sarcofago right off that is an all-around tighter sound that gradually eases down into the abyss of poorly-produced historical relevance; this portion resembles more Norwegian black metal as you get to the demo phase of the band’s career or even ‘87’s I.N.R.I., a heralded masterpiece among ardent black thrash fans, and the influential style is easily identifiable and undeniable. This is most certainly a band that holds up some four decades after the fact, a rarity in any movement.

Everything from Rotting to the Satanic Lust demo is a genuine treat as you get to hear some of the earliest forms of this sub-genre that aren’t attached to the obligatory mention of Venom; sure, Venom will always be the forerunners of the medium, and with just cause, but a band like Sarcofago, in many instances, houses a more unfiltered sound. When I heard Venom for the first time as an eager 11-year old in the summer of 1983 I was so immersed in the mystique as well as the sounds. Now at 40 I am still amazed enough to be a lifelong “Legion”, but I will admit to hearing a bit more depth to a small number of bands that picked up the mantel post-At War with Satan to a much more sinister degree. One listen to “Recrucify” or “Third Slaughter” should lend credence to this statement as it infects your psyche and stirs your senses accordingly, ala “In League with Satan”. In fact, the “Third Slaughter” track always made me think of early Sodom ala Obsessed by Cruelty, so the gamut was run in terms of influence and impression early on.

For the treasure hunters among us, you’ll do yourself a service to hear Sarcofago for the first time. While some of the material is, in a word, dated, it still resonates like a thick layer of bonfire smoke hanging in the air and sucking the very life out of the general vicinity. The music is vastly primitive, but within the module of said antiquity is a true delight from the dimmest recesses of evil and degradation.

No matter how broad metal gets, sometimes going to a more simpler-yet-brutal rout is the way to go. Brazilian Black/Thrash masters Sarcofago are unknown heros in Metaldom, bringing back brutal old school Satan inspired metal.

Led by ex-Sepultura singer Minas Gerais Antichrist (real name: Wagner Moura) who left due to the direction that the band was taking. He found some like minded musicians that wanted to play basic, primal Black Metal that is close to very early Bathory, Hellhammer or even Venom... and Sarcofago was born. They never attained the status like Sepultura, but they were a blood thirsty cult following in both South America and Europe as well.

Tracks like the infectious blasphemy of 'Satanic Lust' to the ultra Black/Speed destruction that is the cut called 'Song For My Death' are heavy and very primal slabs of straight ahead old school BM. It is raw and aggressive, and has no room for the more orchestrated songs that some of the bands today have. This is almost feral in nature, which perfectly brings every evil word uttered into clear view - ands scares the crap out of every Christian that inhabits the world.

I love compilation albums at times, especially when I know little to nothing of the band. I have heard of Sarcofago over the years, and am glad to put the music to the name. With twenty songs offered up, you get to know the band well and will be thrilled. This is exactly the type of Black Metal that I grew up on, and always gravitate to when wanting my Satan fix... and all delivered with simplistic malevolence that is lacking with BM today.

The band is sadly now split up for a very long time, but their blasphemous legacy still holds the full power. All Black Metal bands need to take some serious lessons from this band - that every song does not need a Degree in Music, just passion and a fuck you attitude.