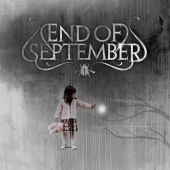 With a little trepidation and a whole load of apprehension as well, I put in a female fronted Morden Metal act from Sweden called End Of September, unsure of what was being offered up. I love metal with a good female vocalist for the most part yet lately I have not been hearing good ones. I will do my job, hit play and begin.... perhaps this will end my drought of finding a good lady metal vocals.

With a very slick and modern sound, End Of September is a very ambitious attempt at combining a little of a Power Metal feel with more of a Progressive slight Alternative edge that is now out there. It is very ambitious venture into melodic metal but for me, it clearly does not work on any level.

Throughout the album, I find myself really thinking about the nine tracks. Musically, they seem to be pretty good, never really doing anything but sounding like hundreds of modern bands out there, not to mention sounding boringly alike from song to song. Even the vocals, albeit kind of good, have no power or strength seemingly as if this woman might be better suited to Pop as her sweetness drags down an already musically floundering band into a sewer pit.

If you want good, strong female vocals with some great music and quality songs to go along with - check out Australian Divine Ascension or Canada’s Unleash The Archers and leave End Of September alone. This band tries to be a modern take on metal, and falls extremely short of even coming near making it work. I see nothing worth listening to, and thankfully I am done listening to their less that good debut album forever.