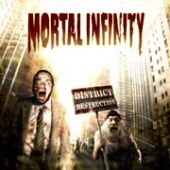 Maturity does not necessarily have anything to do with age. That is a naïve fallacy of people like me, who also thought that for years. If that were the case, there would be no old Nazis or post-Stalinists running around in Europe.... On the other hand, it is possible to have reached a high degree of maturity even at a young age, at least in musical terms. District Destruction proves this. And I'm not talking so much about the razor-sharp sound. It is convincing, also because it does not lack roughness, directness and pressure. But even more amazing is the compositional and playful class of this debut.

Mortal Infinity play variable but straightforward thrash that both pays homage to the old school and ignites a damn fresh breeze. Gary Holt's riffing has an unmistakable influence on the lads, although they refer to "Tempo Of The Damned" rather than "Bonded By Blood". Accordingly, the individual tracks combine frenzy with a certain degree of complexity. Mortal Infinity are predictable because they play flawless thrash, if you disregard the singer's sporadic death growls. Within the boundaries of thrash metal, however, the musicians act flexibly and not at all predictably. The songs are far from technical thrash, but they still have different facets. The variability is somewhat at the expense of catchiness. Mister Holt already knew in his early years that catchy refrains like in "Exodus" or "Strike Of The Beast" additionally enrich a thrash thunderstorm. But again, this only proves that maturity and age are loosely related at best.

The intro lights up the stage perfectly for the eight smash hits that follow. Drilling guitar riffs, mostly in classic thrash tempo, are accompanied by double bass, mangy vocals and occasional background shouts. Impulsiveness and spontaneity are written in capital letters and the almost 40 minutes entertain not at the highest, but at a high level. A single piece that towers above the others and acts as an anchor in the listener's brain does not crystallize, but that remains the only minor shortcoming. Everything culminates at the end of the closer in the repeatedly shouted battle cry "thrash, thrash, thrash", but this is only interesting for the very stupid who thought until then they had listened to a mixture of doom and free jazz and Italian power metal. If the following works Final Death Denied and especially In Cold Blood had not also turned out that strong, one would have to regret that the line-up acting on this album broke up so quickly. But this way you can enjoy an album that makes energy, passion and, as I said, a surprising amount of maturity into a small genre jewel. Check out some representative tracks, for example the raging 'At Dawn Of Death' with its characteristic ending or the heavily stomping 'Wake Of Destination' (it turns the millstone mercilessly) and form your own opinion.

Thrash... metals undisputed superstars. The people in the style never got rich and huge like the 80's hair bands did, but they are a testament to what metal is. The Bay Area was the epicentre for this resurrection. Now, Thrash is worldwide and its a full on movement that just starting to grow.

Germany is more known for its Power and Symphonic styles of metal rather than Thrash - and yet that Thrash scene is growing by the day. One of the bands from German soil dealing out the Thrash, is Mortal Infinity. Combining old school Bay Area Thrash along the lines of older Metallica, Testament and Exodus with more modern metal like Lamb Of God... the results is intriguing concoction.

What this band has in hutzpa, a bad recording has taken away. I love the melodic rawness of the tracks here, but the way it was set down on the recording was close to tragic. Songs like the brash 'Wake Of Devastation' and the nasty bite of 'Condemned Rising' are dramatically stifled by the way the recording of the tracks. They are so muddied that most of the melody is blurred under the weight of the bad mixing job and lackluster mastering. Moral Infinity sometimes sound like their influences as well, but i can see the originality that is just under it all. With the right engineer and time to mature into their own sound, this band could be another Metallica (Old School) or Exodus.

As it stands, they seem to sound like every Thrash band - but there is this definite feel that this is a band about to break out and become a force. Mortal Infinity’s album as it stands, is very weak and sometimes unpalatable over most of the forty minutes it plays, but I am satisfied that this is just a stepping stone for a band that's on the next release might blow a few minds if things come together. Guess we just wait and see.