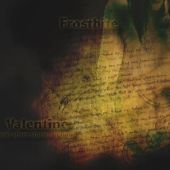 Type: Full-Length
Release Date: 2011
Label: Self Released
Genre: Gothic
1 But For The Beating…
2 My Darkest Dream
3 Valentine
4 The Metro
5 Yet Another Stain
6 Deceit
7 Devient Rien
8 Hurt
9 …Of My Heart
10 Howl
11 Veteran Of The Psychic Wars

I have heard my fair share of Goth inspired music. Some blow me away with its macabre brilliance and haunting message, while others make me run away with the cartoonish and very uninspired music that is sadly given to us. With that said, let me introduce you to a band from Atlanta Georgia called Frostbite.

Mixing Gothic Rock with a wall of metal that adds in a good dosing of Industrial music, Goth mainstay Christopher Lee Compton releases his next mind bending, darkness coloured album. With soul collapsing lyrics and quirky-spooky yet heavy at times music, he is a original on his own but the instantly inventive vocal style is not to my liking. Hollow, melody lacking to the point that it never melds into the music and horribly accented, it is a disappointing sound that kills what the music is.

The songs and lyrics themselves are rich in melancholy, power and musicality - but it is the vocals that spoils the mood. Coming through like a very poor vocals renditions of early Cult with Rammstein, this man’s voice kills any hope of having a good album. The music is pretty good for the most part, if he could omit the Industrial repetitiveness a little, but this man seriously needs to hand over the vocal job to someone that can actually sing. The Cookie Monster puking up acid in the back alley would sound better than this shit... and that is the nice version.

The music that Frostbite has is pretty interesting. With some changes, and Mr. Compton giving up the vocals, this would have been amazing to listen to. As of right now, it is a album that had plenty potential going in to be a Goth classic, and it ended up killed unknowingly by its own creator. Musical suicide is not unheard of in all facets of music, but it is sad to behold when face to face with it.

Someone call a priest - this man’s vocals needs the last rites. Sad, is it not?