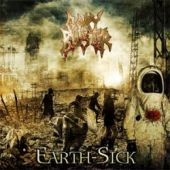 This is a great recent Death Metal album that incorporates complexities into a sound that is reminiscent of earlier Carcass to create interesting material overall. The songs on "Earth Sick" have a weird vibe to them and mix this with elements like speed to create an interesting mixture.

The songs are exciting to listen and varied, which makes the album a fun listen, particularly for the Death Metal genre. There is a science fiction vibe tied in with the song titles and overall atmosphere found here that makes the album quite enjoyable to listen to. The level of song-writing isn’t as polished as some of Carcass’ best material, but it’s still a far cry above a lot of recent Death Metal. The songs are full of energy and well-performed throughout. The vocals present here are growled in an odd manner that gives the album a very unique flavour. Some songs deviate slightly from general vibe here, like 'Serpent Verse', which greatly recalls Nile in its delivery. This band is consistently interesting on "Earth Sick", but there sound starts to wear a bit thin after a few listens.

Regardless, the good moments on the disc make one consistently want to come back to it. The very Carcass reminiscent nature of the band should make them appeal to a wide variety of Death Metal fans as well. This is a great, but not amazing album that is one of the better earlier ones from the genre this year.