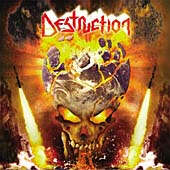 In 2001, German thrash metal legends return once again with another solid release. After their previous effort entitled All Hell Breaks Loose, they put forth one of their most admirable records of all time. Refusing to compromise and give up their genre in order to sell records, Destruction has achieved a high level of success amongst the thrash metal fan scene. Two original members still remain with the band, and lay dynamite on the metal crowd. The lineup on here features frontman Marcel "Schmier" Schirmer on bass/vocal duties, Mike Sifringer plays both rhythm/lead guitar and Sven Vormann is behind the set on drums. The same band members that played on their previous album are also on here. There are two guest vocalists; Peter Tagtgren and Masse volunteering for very brief contributions.

An epic, clean tone rhythm guitar melody opens the album alongside a devilish sounding spoken piece accompanied with it. It segues into the second track; of which, paves the way of how the rest of the album is going to sound. Fresh and distorted rhythm guitar riff gallops are quite well pieced together alongside the bridge and chorus for the song "Thrash 'til Death." The music is well grouped together with Schmier's vocal outputs. There is a lot of energy put forth on this album. The creative guitar bits by Mike reflects the Destruction of the 1980s era. The riffs are very well constructed. It is a close call as far as what to consider as a better release, All Hell Breaks Loose or this one. The guitar is a little more technical here; therefore, this release seems to be a stronger effort then their previous one.

Musically speaking, each song is very aggressive. It carries with it structures which are quite technical. Again, the main rhythm guitar work follows the vocals with precision. Another good example of this is on track three entitled "Nailed To The Cross." The bridge and chorus factor in very well, and the aggressive vocals by Schmier screaming the words "nailed to the fuckin' cross" is quite a smash to the listeners' brain. His vocal outputs are fiercer here than their previous onslaught. It does fit Mike's guitar riffing; from the musical standpoint at least. It's really amazing that only a little more than a year after their prior release they were able to come up with fresh, strikingly new thrash metal songs.

In terms of the sound, the album has a good crisp vibe to it. Each instrument and vocal output are very well mixed together by Peter Tagtgren. There were only a few negative things that I hold overall on this release. The first one is Mike's guitar leads; they aren't very well executed. He seems to really just improvise on each solo without exhibiting any sort of arpeggios or sweep picking. If he just stuck with the rhythm guitar, this album would be next to perfect. The second complaint that I have is the lyrical topics that Schmier focuses on. They are about religion being a joke, some tracks about politics and lastly talking about heavy metal music in general. They aren't very well thought out, yet I suppose that it's the concept he tries to convey with his songwriting. The U.S. version of the album doesn't feature any cover songs. The Japanese one; however, features two live tracks and a cover of the punk band The Exploited.

In summation, Destruction puts forth another solid display of thrash metal to their discography. It's definitely a good thing that the band decided to get back together. After a decade of silence during the 1990s, their decision to return as a band is great. This holds true especially for longtime fans. Some other good pieces to check out here are "Bullets From Hell" and "Godfather of Slander." All of the songs have their strong points to them. This album is very innovative and intricate. Their highest achievement; as previously mentioned, exists on how unique they were able to link the guitar work alongside the bridge and chorus sections. With this brilliance, each song shines and contains admirable thrash metal quality. Aggressive, original and a unique sound makes this release to be among one of their finest.

After “All Hell Breaks Loose” which was more or less a market test, Destruction comes back with full force and determination to bring thrash metal to its previous heights. And if anyone would be able to come even close to the once most popular genre that would be Destruction. “The Antichrist” is a big step forward in that direction.

If I had to describe this album in one sentence it would be: German thrash metal from the early 80s with XXI century sound and production. Actually, I don’t really know what else can I say... even the cover relates to 1985’s “Infernal Overkill”. Schmier, Mike and Sven play fast and heavy while it seems like they have a lot of fun doing it, and that’s immense because isn’t it the point of making the music to start with?

But heaving fun doesn’t guarantee a great album and one of the main reasons that “The Antichrist” falls short of being one is its repetitiveness. Almost all songs are in this same tempo and are heavily influenced by atmosphere of its 80s predecessors. Don’t get me wrong there are a lot of great moments on this opus but if Destruction ever wants to move over their past glory they can’t record its ‘own covers’.

If you are a fan of music progression stay away from it but if you are like Peter Tagtgren (the man who recorded this album in his Abyss Studio), a fan of the “Eternal Devastation” authors since day one, “The Antichrist” will blow you away. To sum it up - old fans unite.

Bottom Line: I don’t think thrash metal will ever come back to its glory days from the 80s but if it has any aspirations to make a mark on today’s metal scene it would be because of albums like Destruction’s “The Antichrist”.