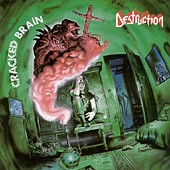 Type: Full-Length
Release Date: June 1st, 1990
Label: Steamhammer
Genre: Thrash
1 Cracked Brain
2 Frustrated
3 S E D
4 Time Must End
5 My Sharona
6 Rippin' You Off Blind
7 Die A Day Before You're Born
8 No Need To Justify
9 When Your Mind Was Free
MetalBite on YouTube

Destruction without Schmier is like Motörhead without Lemmy. Show me someone who is of that opinion and then I show you a liar. Referring to Cracked Brain, the line-up change had absolutely no effect. Destruction still held the flag of thrash high and the vocal performance of André Grieder was on a par with that of his better-known predecessor; moreover, his voice did not sound completely different. Incidentally, let's face the truth: Schmier is a charismatic and probably likable guy who embodies the German metal scene in a credible manner since more than 30 years, but he is not the greatest vocalist of all times. Anyway, I have to turn the spot light on Cracked Brain.

Grieder sang comparatively intelligent lyrics. According to the well-designed artwork, they mainly dealt with personal feelings like depression and desperation. "S E D" marked the exception. Its name stood for "Socialist's Eternal Death" and the song was about the downfall of the criminal regime in East-Berlin in 1989. "SED" had been the name of the factually one and only party in the German (so-called) Democratic Republic, the shitty "Sozialistische Einheitspartei Deutschlands". This was not the first political topic that the band picked up, but as far as I see, it remained the last.

Of greater importance was, as always, the musical content. Destruction played a mature and appropriately aggressive kind of thrash metal. The average velocity was comparable with that of Release from Agony and the riffs reflected the good level of the band's musicianship. Awkward breaks or half-baked choruses did not show up and every song flowed smoothly. Sharpness and melody were open to one another and the result was surprisingly strong. No song fell through the net which was spun by the efficiently working guitarists. Their performance shaped the album, but this does not mean that they wallowed in technical gimmicks. Without the slightest touch of arrogance or narcissism, Harry and founding member Mike were concentrated on creating coherent leads.

Unfortunately, the production was relatively flat with the consequence that it lacked pressure. Without hurting the penetrating power of the tunes in a considerable way, the sound did not fully convince and had to be categorized as suboptimal. This shortcoming is the reason why I cannot give a higher rating, although the album fascinated me strongly at the time of its release. However, Cracked Brain is still a recommendable album and its best songs forced every poser on his knees (did I already say that this review is part of my old-fashioned and vengeful anti-poser campaign?). Straight tunes like the slightly nervous title track with its weird solo part or the pessimistic and intensive "Frustrated" left no questions unanswered, while an almost progressive piece like "No Need to Justify" added another facet of the band's musical spectrum. Finally, the staccato riffs of the cover song ("My Sharona") worked very well.

Regardless of the rising crisis of the genre, this album delivered authentic and professional thrash metal. Despite its outsider status, it belongs to the best works of Destruction. Sorry for that, Schmier.

In retrospect, almost 30 years have gone by that this record has been in existence. The re-issue doesn't take away from the magic of this release minus Schmier from the lineup. But the staple 3 members that appear on Release From Agony are featured on here (Mike, guitars Harry, guitars and Olly, drums). There was a session bassist by the name of Christian Engler that takes Schmier's bass duties. I've always felt that this would've been a much more solid release if their frontman wasn't on hiatus for this recording. However, it is what it is and Schmier's been back for a while now so that's not changing anytime soon. The older riffs on this album especially have been Destruction's finest. I don't think that anything, but a few newer releases are as catchy as the old stuff, Cracked Brain included.

I remember I had this on cassette way back in the early 90's for an occasional listen to though the tape did not survive. Well, Andre (Poltergeist) does a fine job though because he had some pretty big shoes to fill especially Schmier being on Destruction's first three full-length releases along with a live recording (Live Without Sense, 1989). This being recorded in Germany along with the three main members or at least 3 out of 4 on the previous. They had some great elements on this recording but if only the production were a little more solid, the vibe with have been tastier. That's my personal opinion, though. Destruction have always have their own style of thrash reflecting (as Schmier has said in interviews) that they're sort of punk rock inspired. That's not too far off.

American thrash metal bands from the early on (some of which) have gotten out of the music scene completely or changed their style of music. But Destruction has never changed their style of songwriting which is why I believe they've been true to their roots since born into the metal scene. This was way back in 1982 under the name "Knight of Demon." Of course, the change has been made to this day, and a much more suiting to their musical ensemble. But anyway, the cover of "My Sharona" by the Knacks was well done, though they could've left it to the end of the record, but it hits about mid-way through the album. I suppose they wanted listeners not to lose interest kind of like the song on the Mad Butcher EP, the song "Mad Butcher" which is sort of by getting aroused by the opposite sex.

The whole feeling of Cracked Brain has a reverb type of echo as with Andre's vocals. Harry once again was phenomenal on lead guitars. It's a shame that he's left the band for good with "occasional" guest appearances on newer releases. From my understanding, he used to practice the guitar for 15 hours a day! I'm not sure how true that is, it definitely is believable. He simply shreds. Mike has always been great on the rhythm guitar department; however, the lead guitar was never his forte. I guess you could say that they were stronger in the 80's as a 4-piece act. But things didn't happen that way from now here-on. These leads by Harry on here are once again phenomenal and in the riff department both guitarists don't set short of anything but greatness.

German thrash has this element that I talked about and sort of makes American bands in this genre a little bit more or less likable, though I've always have been an old-school Metallica and Testament follower. But Sodom, Panzer, Destruction, et al have a special scene in the thrash genre. There's just more element to this style of thrash. Be sure to key into the songs "Rippin' You Off Blind" and "Die A Day Before You're Born". These are classics here on Cracked Brain. Even though I like the music here, there's no one that can replace Schmier on vocals. It was like the three members kept the music aglow but the vocals, well I don't or never have favored Andre's tone. If only they could record this album (full-length) with Schmier, then a-ha the album would've been done more justice.