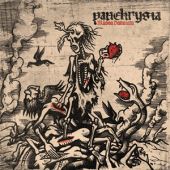 I had been having a talk with a good friend on line about Black Metal and how it has changed over the years. Sadly, my buddy and I both had been to a Venom show in the late 80's, thus showing our ages. I can still feel the power of the true pioneers of Black Metal as the thundered through there set and me knowing that this was changing my life forever. A whole lot has changed since I was at that Venom show. Case in point is a Belgian act that is as brutal and harsh as anything called Panchrysia.

Sporting acrid spat lyrics and nearly barbaric and oppressive riffs, Panchrysia moves out of the pit of hellfire and commands you to listen. With mass amounts of musical talent that is in your face as well as foreboding for your soul, this Belgian group takes the fire of older Black Metal, add in some of the newer versions of BM and then ups the musicianship to Prog status - spawning an act that can channel the all mighty Satan from his seat in Hell and sound so hauntingly good as well.

I was so impressed by the lyrics, as they were clearly Satanistic and yet was so intelligent about it- and not like they have came out of a very bad horror movie about conjuring the devil. Each one of the songs are delivered with flawlessness in its dark vision and clearly sets its pain fuelled story throughout. I will say that ever song is incredible, but I would pick out a couple as the best here. The infernal tale that is told well is by the track 'Black God' while there is a blasphemous lament that is perfectly told by each word that makes up 'Of Rebel Angels'. These two are the best of the best this band dealt us all.

Having the best of both worlds, impressive musical progressiveness and this blackened - soul stomping Black Metal, Panchrysia delivers what I am thinking is a near perfect album. It is not Venom, but I think these Belgians are coming close to becoming Black Metal Royalty all on their own.