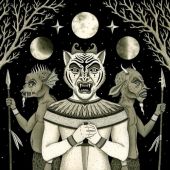 Type:
Release Date: 2011
Label: Indecision Records
Genre: Hardcore
1 I Never Want To Hear Your Voice
2 L'Esprit De L'Escalier
3 A Temporary Fix
4 The Forever Decision
5 The Outsiders
6 Kill Or Cure
7 Every Stone Unturned
8 With Time
9 All I Had To Give

When Tigers Fight is a sort of Hardcore Crossover supergroup made up of members of Damnation AD, Another Victim and other bands in the scene. Frantic and holding this metallic sort of viciousness to it, they cut through you with short but loud blasts of music, but even though I grew up on some of the best Hardcore (Black Flag, Exploited, ect), When Tigers Fight seriously never measures up.

Heavy, angry, loud and short songs, they have bucket loads of - but quality is not one of them. They seem to sound like another face in the Hardcore crowd trying to play cheap metal riffs, opting for furiousness rather than having any talent. With nine tracks that are all practically the same, down to the very mundane riffs that seem to be recycled again and again like some bad movie cable won’t throw out. Even the shouted vocals are almost cliché to a fault, the fact that it would be an improvement if they were a stereotyped version will give you pause to understand what my mind was saying... this band sucks.

All the songs sound alike in almost every way, it seems to be one very bad song... a deal breaker for me. Punk and Hardcore has never been about technical brilliance in what they are playing but Punk needs some skills, and this has none to offer up. Punk is simple, straight forward and has some intelligence, this just sounds like a bitchy 90 year old man complaining about everything with a looped tape of bad music playing behind his wrinkled ass.

I heard their first album after writing most of this review, and let me tell you that first one was good and angry and full of talent that oozed everywhere. This album on the other hand is just wrongly placed anger with a band that has no originality or talent anymore. White noise gone wrong. This was the nicest way I could write about this album, but how I needed to write it, the album don’t deserve anything else. Not metal... garbage Hardcore... got it?

Need to listen to The Misfits right now... When Tigers Fight needs to leave my head.