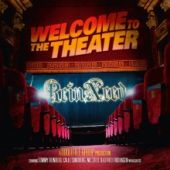 Type:
Release Date: 2012
Label: Liljegren Records
Genre: Power
1 Welcome
2 Life Will Find A Way
3 Follow Me
4 Save Us
5 Stranger Tides
6 Somewhere In Time
7 Freedom
8 No Fate
9 Temple Of The Crystal Skulls
10 Welcome To The Theater

Back in the 80's, Christian Metal was ... er... for a good term... sounding fluffy. It was all flash and not too much substance for the better part of the first wave of the Crossbangers. Stryper was good to a point, so was Bloodgood with their rip off Ronnie James Dio(RIP) riffs. Then came Australian extreme Christian band Mortification and showed our White Metal brethren that they could Thrash as hard as their secular counterparts. And now we have Christian Symphonic Power Metal ReinXeed showing a whole new angle.

Coming across like a Christian version of Helloween, Satavage and oddly spiced up with Trivium, ReinXeed is a sweeping and shifting Power Metal band with symphonic tendencies. Led by multi instrumentalist genius Tommy Johansson, he has turned a one man operation into a six member force to be reckoned with. With sweeping guitars, synths that actually are good and a powerful vocal styling - Power Metal has been stepped up a notch or two.

Based on movies Mr. Johansson has enjoyed over the years, "Welcome To The Theatre" is a sweeping musical look into movie history and spins it out in true Hollywood fashion big and boldly. I really like the tracks like the 'Save Us' and the title tracks for both lyrics and the blazing musical attacks, but I will let you guys figure out what movie(s) these tracks are based upon - that is the fun of it.

This album has it all. Great music, fun topics and all done by a band that rocks with class. Can you think of anything that is this good. I can’t - so my advice is to buy, listen and repeat. Enough said? Move over Helloween and even Trivium - this is a band that truly has shouldered past the both of them and stands alone and proud.