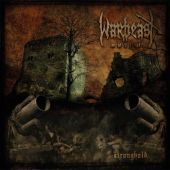 I know how much of a pain in the ass it is when you have to change your bands name because of idiots in a band of the same name cried over it - it sucks! Belgian based Warbeast Remains had to change their name due to infringing on a Thrash band that was based in the US. Going with the moniker Warbeast MMVIII on their first full album for Shiver Records "Stronghold", after its release, the nane now is Warbeast Remains.

Mixing a deadly concoction of Death and Thrash metal with a little Nu-Metal grooves, then Warbeast MMVIII finds its bearings and hands over an album that is pretty good overall. Minor glitches and perhaps their ages are small factors here showing some inconsistent songwriting that shows a creative directional problem as well. The band are heavy as lead, but the songs seem to be so scattered and jumbled that it does not let the material settle into a natrual order.

I love the brutal nature of what Warbeast MMVII is. They can play some impressive riffs that are slick yet come across as so powerful but I find most of the album feeling little all-over-the-place when they try to put it all together. I did like a few tracks, but as a whole I was underwhelmed. 'Warcry' and 'Fleshless' were the best two of the CD, and shows that the band does it right once they smooth out the rough edges and get their direction right- yet they only do it on these two songs.

Once the band settles into being under the new name for awhile, I think that they will find themselves and the music will follow suit. They are scattered in all areas, but after all the crap they have endured - who would not be? Watch out as the band finally discovers who they are, they will be a force that will excite critics and metal fans alike.

I gotta hear their EP that has been released since. It might prove me right.