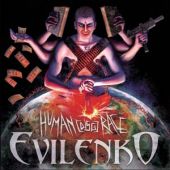 Type:
Release Date: 2012
Label: Shiver Records
Genre: Death, Thrash
1 Intro
2 My Own God
3 Leave You Behind
4 Suicide Note
5 Solution To War
6 Surrender
7 My Way
8 No One To Blame
9 Fight For Justice
10 Cry For Freedom
11 Bleeding (Bonus)

A hodgepodge is basically an incorporation of many different things to make one united thing. Sometimes musically this is a good thing, and sometimes it is worse than shit left out in the sun with a garnish of rotting fish and every little point in the middle. That is how metal was formed, in the crucible where Blues, Hard Rock, Volume, leap of talent and that all needed ‘fuck you’ Attitude collided to make musical gold in the ensuing genesis of our lives.

Mashing together extremes of metal goodness like Thrash, Death and flagrantly nasty Hardcore into one living beast, Belgian metal merchants Evilenko come out of that fiery beginning, to show the world what they are. Combining these ingredients was an amazing venture, as the heavy music was fuelled by these weighty styles into a drooling and predatory beast which only lot in its life is to rock the world and eat all false music.

I was stunned by just how good Evilenko was. 'My Own God' thundered out and blitzed my very soul with its old school Thrash riffs that have the right touches of Hardcore that just oozed that pure attitude. Other tracks like the violent 'No One To Blame' and the rather unique 'Solutions To War'. Music and lyrics aside, the only thing wrong here is the vocalist. I love a screamer type, but one that holds a melody to go with it. Jo Dewaelheyns holds massive power, but seems to miss the whole melody with his ranting. The voice itself is powerful, but instantly takes away from the music he so desperately tried to command.

In short. Music good, vocals bad. Perhaps it might be a recording glitch or something, but it seems that this singer is not the one for Evilenko. He would be perfect for a straight ahead Hardcore group but as a metal vocalist, he sputters in flight and crashes to the ground in a fiery ball that thankfully explodes and burns itself to nothingness. Sadly dragging the rest of the band with him. They need a vocalist!!!