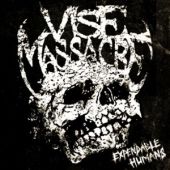 Way back, I was a rebel even amongst my headbanging brothers and sisters. I was a metalhead that also loved listening to vicious and yet well played Hardcore Punk like Dead Kennedys and Black Flag. Even today, some of my favorite songs are that rebellious little brother to metal. I was perhaps ‘crossover’ before the term had ever surfaced on the musical landscape, considering Punkers and Metalheads were at the time, mortal enemies bent on destroying the other.

Vise Massacre hails out of New York City, and they are the real deal here. Blending perfectly the aggressive straight forward chaos of Hardcore with the more refined and controlled explosiveness of Death Metal with a touch of thrash to perfectly execute what true Crossover is. Think of early Hatebreed with SOD, Cro-Mags and Dark Angel, combined with a mile high ‘fuck you’ attitude.... awesome, HUH?

Looking at the list of songs on the album while listening to it, I can only say that not one song actually stood out as the best here but each one seems to have a life of its own. All the songs were incredibly well made and had this venomous aggressiveness that grabs you, and they still keep this unpolished and unwavering ideology of Hardcore that seems to complemented the banger philosophy as well. These two sides seem to meld well together, while still fights hard to be the leader.

I was so impressed, as I heard the Crossover sound that I love to hear - one part metal, one part Hardcore and full of blistering attitude. This is not near rocket science, or its just another shredder band that wants to be over complex and make the music inaccessible to the audience. This is a band that makes music that is simple, yet not stupid and always brutally honest. This is what both Metal and Punk is all about... celebrate it.