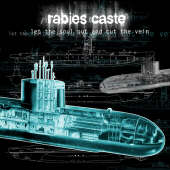 Buy on: Bandcamp
Type: Full-Length
Release Date: 2001
Label: Earache Records
Genre: Sludge, Stoner
1 Got It From Blake
2 Prove Me
3 The Bleeding Mermaid
4 There Is Nothing You Have Seen
5 Hand Abortion
6 Out Of The Solar System
7 Haemophilia
8 Steel Right Through The Mouth
9 I'm So Tired
10 Andrea

Are you a kid who is tired of jamming in your basement dreaming of getting a record contract. Do you feel like you are getting nowhere at all? Well then you should be extra tired of bands like this coming out and releasing this kind of music. Actually I believe we have a new style of music created with this disc that I like to call Basement Metal. Imagine an annoying un-tuned snare drum being hit over and over again and some guy yelling wordlessly into a fan or something and you have a pretty good idea of the quality of the material on this record.

The music itself is very basic and the riffs probably hold the record for some of the slowest played music in history. The group does pick up a little bit for song number five entitled Hand Abortion (try not to laugh) but all in all every song sounds like the one before it. Hell if I wanted to hear slow and boring hard rock riffs, then I would have better luck picking up the new Staind disc.

Not to rat these guys out completely, but there is not much to enjoy on this cd at all. The vocals get old very fast as they are the same in every song with this incredibly annoying effect on his voice the entire time. The best thing here is the drummer, who at times, creates some pretty interesting beats among the plodding guitar work. However, his drum sound is one that takes away from the quality of his playing which is another letdown.

One mentionable highlight on the record is the lead riff on the track Steel Right Through The Mouth which actually succeeds in getting into your head. I am pretty sure I will be humming this one for at least 1 minute or so before I pop in some real metal. So overall this disc pretty much blows which is a shame or maybe it isn’t. However if you are a fan of monotony, then meet your new favorite band. If not, then I recommend skipping over this one.

Bottom Line: Metalheads beware! If you hate bands like Slipknot for using the Korn style at times then you are going to want to stay as far away from this as possible!