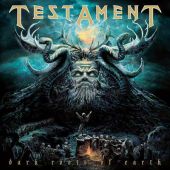 Another band from my seemingly ancient childhood has emerged to drop yet another new album in my lap. Testament, a band that has been criminally undervalued for the likes of Megadeth, Anthrax and countless others I'm too kind to mention, issues Dark Roots of Earth with a thrash metal vengeance that will most likely lay waste to pretty much anything else the medium has to offer.

To say that Testament hasn't had a misstep or two in nearly 30-years of heavy music isn't exactly truthful, but to absolutely claim that the band is still at the top of the game with this release is vastly understated. All of the incidental perfections associated with the artifact known as thrash metal are present and accounted for, especially with the powerful opener, “Rise Up”. Cliches aside, it's the perfect opener for an album by a band that is bent on showing up the youngin's vying for position in this crazy battlefield called heavy metal.

Another element immediately noticeable is the thick production that was literally screaming for a band like Testament to come and puff up the edges while retaining a sickening layer of sound that just covers you like a drenched blanket, immobilizing and enchanting you. Of this supposed “Big Four” Testament is sometimes seen as Oliver from the last season of the Brady Bunch: the cute little add-on at the end to round out the picture, but I'll tell you, in my opinion, Testament is the band out of all four that has the most to say in the tightest fashion in the modern day. This band has never forgotten its roots, never stultified its role in the movement, and has never given in to label pressure like some genre-jumping bands hoping for the momentary mall-metal crowd. When something as tempestuous as “True American Hate” starts burrowing into your brain you know what you're experiencing is the real deal, raw and reckless, not to mention integral and precise.

The music on this latest effort is a fascinating journey into the annals of thrash metal history, complete with disturbingly potent riffs and overpowering vocals the likes of which are often imitated and never accurately reproduced to any discernible degree. Chuck Billy is the whole package when it comes to his singing style; the heated and often elevated effort he issues with each and every song showcases that familiar bellowing we've all come to know and headbang to over all of these years. “A Day in the Death” is probably my favorite track in that it has elements of The New Order and Low that seem to mesh (to an agreeable front) that wondrous past with the modern era we so desperately hope to hang on to for fear of it going the way of the screamo era. I think it's safe to say that Testament won't be doing that anytime soon.

Alex Skolnick and Eric Peterson provide the dual attack that is oh-so-familiar and provides us fans with the very template with which we build shrines and imaginary marble homages to these heroes from our past. The guitar tones are easily recognizable as Testament and the fluidity of “Throne of Thorns” is one of the best examples of a chugging, thrashing riff if ever there was one. Even in today's over-populated medium an aging rocker or two can muster up the strength to batter those fretboards so sweetly that its fan base salivates with every chord in ways Pavlov never thought viable.

For any naysayers out there claiming the oldsters are mucking up the works, Dark Roots of Earth defies the expectant rudiments and trappings of a genre lost to unfiltered degeneration and slaps the faces of the hesitant elite that will never understand the true power of this band. For all the years under its belt, Testament provides a swift kick to the face with the steel-toed boot of thrash metal, carrying inside it a long lineage of honor and respect.

We expect and accept nothing less.