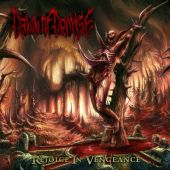 Dawn Of Demise. I think I’ve heard the name somewhere, sometime ago but I cannot say if I ever had the pleasure to listen to what they have to offer. They got three releases under their belts and they have been around since 2003. What I have in my player is their 2012 album “Rejoice In Vengeance” so here is my chance, but after first few spins my opinion about our first meeting and the material is still not set. It feels like something is missing.

First thing I usually look for or should I say ‘listen for’ is the sound. Many bands on many albums lost their chance of becoming great because of how their album sounded. I’m sure all of us can throw in some examples here. Dawn Of Demise don’t have to worry about such things. Sound on this one will appeal to many metalheads and, I suppose, not only them. Big, bold, solid and juicy come to mind and that’s the way Death Metal should sound in my opinion, but there are few things that - even though not half bad - keep me from complete enjoyment and giving these guys higher notes.

One of them is the tempo. For some reason that is not known to me most of the album is recorded in a mid to slow tempo that shifts or gets moved into higher gear from time to time. Even though I am a fan of slow and crushing, Dawn Of Demise seem to overdo it quite too much for my taste. It gets a little annoying when after few listens I know that there are many parts when they speed up and (I have to say that’s WHEN) things get really interesting. For example: drumming. In the slow parts of songs there isn’t much happening, they go for the simple and generic oompa-oompa with cymbals, but when tempo raises, drumming becomes so much more alive and inspired. ‘He Rises Again’ would be a good example of a song that gets you going and keeps you listening from start to finish. Fast paced with good riffs, rumbling drumming and guts wrenching vocals. That one brought back my interest and got me focused again. Whole second half of “Rejoice In Vengeance” seems to be better thought of and more energetic. Songs are more crushing with more changes and all elements fall in place more natural. Solos that can be heard in (for example) ‘The Epitome Of Brutality’ and ‘Exsanguination’, even though very short, are an awesome treat and I think bring much needed differentiating elements into whole album. Vocals range from deep guttural growls (Brutal Death style) to growling that at some parts allows you to hear some of the lyrics. I like both but I think more accessible growl that can be understood was a little neglected. I wouldn’t mind Scott Jensen moving into that direction slightly more. As a matter of fact I wouldn’t mind if DOD mixed it up much more and didn’t stay away from speeding up more often on next album. In my humble opinion “Rejoice In Vengeance” is a good album but it gets much more interesting and gripping when tempo gets ramped up, vocals switch from one style to the other and drummer awakes from just hitting the rhythm.

To sum it up and put it in few words: switch between tempos and growls, let drummer go crazy, more solos and background motifs. Mix well and serve loud.