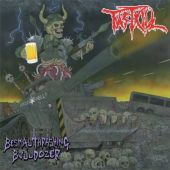 Band names can be a little odd, you know that. You got to be extremely creative, somewhat crazy or both to get that perfect name that stands out from a crowd. Japan has been known for naming bands curiously, chosen odd sorts of moniker, or stereotyped so badly that it is clear as hell what they do - yet those same band names seem to always somehow fit. To make my point on this, I give you the Japanese Thrashers called Fastkill. It is pure metal cheese through and through like melted blue cheese, and yet it that sort of cheesy name really does works.

Moshing their way from the metropolis expanse of Tokyo, Fastkill is a band that rips your head off from the very second they start to play to the end of the CD. Playing very exotic yet massively heavy sided traditional Thrash since 1996, these veterans of the pits seem to have perfected their bombastic sound and kicked the adrenaline level up to the maximum to deliver a wall of pure metallic bliss. And they are so damned good at what they are doing. It is refreshing to hear old school rearing its head.

I hear some shadings of early Overkill, Possessed, early Sacrifice (1st album, "Trial By Fire") and even some thrashier version of Grave Digger in here, along with the usual thrash inflences here. Songs like the pit creating 'Die In The Pentagram' and the headbanging anthem 'In Thrash We Trust' are fun and explosive old school Thrash. It is totlly cheesy and somewhat tongue in cheek, but it is still better than most bands that are out there today. Admittedly, I am not a big fan of the high pitched screeching/screaming siren of Lead Vocalist Toshio Komori, but I have to admit it fits well with their sound.

You're not going to get a new genre of metal out of Fastkill, just straight forward Thrash that pummels your senses and urges headbanging. It is very stereotypical early thrash scene, but that is what makes it good and fun. Ya can't ask for much else, except for a cold beer - and you have a few in the fridge to listen to this album with. Grab a cold one, listen to this impressive album and I am sure that you will agree. Horns up.