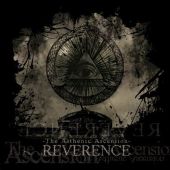 Power Metal from the states is getting better by the day, which makes me smile a little. Usually the best of Power Metal comes to our ears via Germany’s thriving metal machine, but the new breed that is comes to us from the land of the stars and stripes seems to be growing both in strength and in popularity. Case in point, we have Detroit’s newest metal masters, Reverence.

This working class band from the auto capital of the world does not follow the Motown thing, going in the rout of classic metal of the past - but they play some of the best Power Metal with added meat of Traditional as well- and that is so damned good. With members from such acclaimed acts like Tokyo Blade and Satavage - you have some of the best musicians around, not to mention people who can write amazing songs.

I must admit, this was the most enjoyable time I have had doing a review in a while... a terrific surprise. It is an album the really could be a classic all on its own. From the leading explosive intro to 'When Darkness Calls' to the striving metallic mastery of 'Vengeance Is Mine', you have an album that is pure metal through and through and is unapologetic about it.

This is as straight forward of a metal album as you can get - and a fine addition to anyone collection. I am very interested in hearing the next album when it comes out and I will fight who ever I have to be doing the review on that one as well... no one will do that album review but ME!!