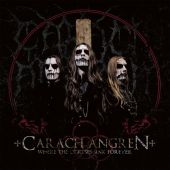 I will claim right here at the beginning of my review for the latest Carach Angren release called Where the Corpses Sink Forever that these guys are the best black metal band out there right now. I expected much after the absolute brilliance that was And Death Came Through a Phantom Ship, and the band has not let me down, surpassing my expectation by leaps and bounds.

Always taking the subject matter of the paranormal to heart, Carach Angren twists and reshapes the medium so easily; at times I’m reminded of Mister Doctor from Devil Doll in vocalist Seregor’s delivery, which is a pretty obscure reference I know, but it fits if you look up, say, The Girl that Was Death. That said Carach Angren issues some of the finest black metal music these ears have ever heard, and seeing as I’ve been around black metal for close to 25-years it says a lot. The tracks range from casually haunting to ferociously sinister, providing a classic one-two punch to the sternum.

The album opens with a sound byte that sets the tone perfectly for the record, only to just blow over the foundation like a Joplin tornado void of feeling once “Lingering in an Imprint Haunting” begins. What is most incredible about Carach Angren is how they take the symphonic black metal tag and literally redefine the sub-genre. This band implements black metal to an absolutely perfect degree, forming visuals and creating scenarios in your mind that move along as a stunning storybook. I will further add that true thinking black metal is issued in high increments here; this is a band that cares so much about its music and the story being central to the music that they pull out all stops, dismiss all convention and create beautiful and resonating soundscapes that are beyond fascinating.

I cannot pick any one track over which to gush; this entire collective is about as majestic and enchanting as it can possibly get. The use of keyboards and orchestration is so expertly handled by Ardek that he renews my faith in those 88 little keys that are often so criminally molested and ill-used it should be illegal. The general mesmerizing that is Where the Copses Sink Forever­ is so serene and wonderful that I’m completely entranced into this haunting tale with veritable ease. This record assembles a spectral beauty and musical majesty that can cause even the most ardent critic to shake his or her head in amazement. From the understandable and well-enunciated lyrics, to the very bottom notes hidden under the sea of sounds, this album is precisely what today’s black metal movement is sorely missing. I’ll be honest, I think this band was about two decades late in turning over the entire movement from the bottom over, but in a vast expanse of pedestrian and rudimentary bands polluting the medium they are the shot of adrenaline we need.

One thing I can say about Carach Angren on this release and all others is that they take the symphonic element to all new heights. Often times the music sounds like a sinister and meticulous conglomerate of peripheral sounds that not only add to the theme, but help to create its wondrous aura. I’m not sure where Carach Angren found such incredible perfection, but I’ll be damned if I’ll question it. They take the concept album to avenues not defined so widely since Alice Cooper’s Welcome to My Nightmare, and even then it is splitting apples and oranges. This jaunt through haunted wartime imagery is precisely the vehicle needed to initiate both external and internal responses to vastly mental stimuli. What Carach Angren captures here is not just ghostly, anecdotal poetry in music; the band finds a center of illumination and pulls the listener inside with sheer talent and innate, concise imagination. I know this will be in my top ten list at year’s end, and I cannot recommend this album any higher.