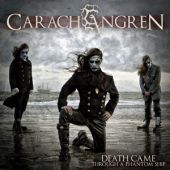 Type: Full-Length
Release Date: 2010
Label: Maddening Media
Genre: Black, Symphonic
1 Electronic Voice Phenomena
2 The Sighting Is A Portent Of Doom
3 And The Consequence Macabre
4 Van Der Decken's Triumph
5 Bloodstains On The Captain's Log
6 Al Betekent Het Mijn Dood
7 Departure Towards A Nautical Curse
8 The Course Of A Spectral Ship
9 The Shining Was A Portent Of Gloom
MetalBite on YouTube

As an avid, nearly insatiable fan of ghost lore and hauntings, I was especially intrigued by Carach Angren since its existence is built on such topical leanings. While many black metal bands attempt haunting, frightening, or atmospheric surroundings, only to come up short, very few actually write about ghostly events, and this alone is enticing. I had to familiarize myself with the band from here, and I am all the better for that.

From the band’s first EP, Ethereal Veiled Existence, the haunting aura has been a consistent theme, especially on the brilliant “The Ghost of Raynham Hall” about the infamous “Brown Lady” that was famously photographed back in the mid-1930s, one of the most frightening images ever captured on film. Since then, the band has remained true to its devotion to the paranormal and other-worldly phenomena. The second offering, Lammendam, was equally provoking, basing itself conceptually around the haunting of the old castle in which a “lady in white” roams the grounds after being murdered by a jealous would-be suitor. Once again, I’m thrilled when I can find a new band that I’ve yet to discover that can be so provocative, yet heavy. There is no Cradle of Filth anymore, people - this is the band to regard in such high esteem. For gothic-type themes, this is how it’s done.

The band’s second full effort is Death Came through a Phantom Ship, which teeters on a classical/black metal hinge quite nicely without coming off as contrived or boring. The topic of a phantom ship is covered perfectly with some of the finest lyrics I’ve read in some time. Along with some very strong music that can only be described as epic “ghost metal” Death is a terrific trek that is laden with wondrous time changes, intricate musical dalliances and vocals that, finally, sound like they would be coming straight from some phantom ship causing havoc on the high seas. It’s a couple of handfuls of albums that can honestly lay claim that the blackened vocals fit the scheme, and this is most certainly one of them.

“Bloodstains on the Captain’s Log” is one of the best tracks on an overall great effort by this Dutch trio, complete with some perfectly-fit double-bass drumming. When you think of epic black metal, Carach Angren is the quintessential choice. The concept album has certainly been raped over the years, providing little long-staying ability that lingers in recent memory, but this one might fit the bill. For me to pick one standout would waste valuable reading time for you, as the entirety of the work should be ingested in sequence to truly revel in the beauty. The one complaint I can afford is that it ended before I was ready to “give up the ghost.”

Taking the musical journey with Carach Angren as the tale of the ship is lamented and described in astute credulity and detail is one not easily forgotten. A virtual symphony to the dead and lingering, Death Came through a Phantom Ship is a well-organized piece of heavy metal genius that should be hailed as one of the best of its kind in recent years. I cannot recommend this album enough; it truly is a must-own. I found myself listening to it twice in a row just to find more the second time around than I did the first, and it’s even more amazing upon a second hearing.

Enlightenment and majesty have not been drained from the black metal scene just yet….