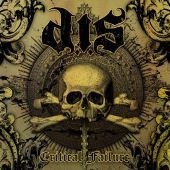 The hype was that this was a crustcore band with (former) members of Phobia, Exhumed and Impaled, so I purchased it without any further thought. After listening to it, I was actually disappointed at first. When it comes to the genre of crust punk, I think first and foremost about bands like Visions of War, Driller Killer, Mass Genocide Process or early Extreme Noise Terror. These bands dabble in filthy, brutal, distorted hardcore punk without a lot of frills, and D.I.S. are definitely a more nuanced beast than those I mentioned, which wasn't what I expected, hence the disappointment. Still, as time went by and I gave it more listens, it did start to grow on me.

At it's basis, D.I.S. are indeed a crust band in the usual way: the music is propelled by a sturdy D-beat throughout the runtime of this album, with barked vocals and a lower tuning of guitars. However, the music goes beyond the admittedly formulaic approach of the bands previously mentioned. D.I.S. add guitar melodies in the vein of bands like Martyrdöd or later His Hero is Gone to the music, and there is also the influence of old school death metal, creating a more varied sound than your usual crust band. It's this that turned me off initially, but after repeated listens it turned out to be this cd's trump card. This approach makes the individual songs stand out from the whole picture, with each track having a feel all of it's own.

Besides being a varied offering as a whole, the album has some banging contributions by it's separate members, and musicianship seems to be of a higher order than the usual rumblings one might be used from the genre. Besides the guitar melodies already mentioned, there is also some raging solo work to be heard throughout and the riffing goes beyond the standard crust punk fare, veering into death metal territory more than once, with a tight overall performance by the band.

This album's strongest point, however, are the lead and backing vocals. Lead vocalist Mike Fisher has a sound that reminds me of the singer of Belgian skate/thrashcore maniacs Reproach, but Ringworm's Human Furnace is another one that comes up. The man barks his way through proceedings menacingly and combined with the lower backing vocals (provided by guitarist Bruce Reeves) it adds a lot of suspense to the music. That the band consists of experienced people is clear when looking at the song structures, as they are laden with well-timed breaks, tempo changes and hooks. Take the bass/percussion intro to 'Bloodwolf' or the Swedish old school death metal opening of 'Bleed Forward', they give the music the needed anchor points to keep it sharp and to the point. If I have to pick out one song, it's 'Extend This Misery'. Here proceedings slow down to a crawl, with the hoarsely shouted lyrics give the track a Neurosis feel before kicking down the accelerator again.

My least favorite part of Critical Failure is the production. Though it sounds clear and aggressive, for me, it could have sounded grittier, dirtier and harsher. Now it sounds just too polished for my taste, making it sound overproduced, especially for this type of death metal infused crustcore.

This album is one brutal and aggressive offering, and keeping the total runtime around 25 minutes, it assures that this block of musical granite does not wear itself out or overstay its welcome. Even if the production isn't 100 percent to my liking, this is still a savage pummeling all around. It has aggression in droves and has variation and energy enough to not get boring. Recommended listening for old school death heads and thrashers who are looking for some variation in their listening habits.