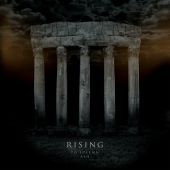 Copenhagen, Denmark has seen its share of really amazing metal come out over the years from its small but vibrant scene, and even today that sort of artistic trend seems to be continuing. Arriving on to our North American Shores is Sludge Groove Metallers Rising. They have appeared for your enjoyment.

Combining a heavy wall of Sludge Metal with some finer points of Groove Metal with shadings of many others was sort of smart in some respects but the sad part of that decision is that they have come out of making this album sounding way too much like Mastodon. There were a few different spots on the album where they broke out into their own distinctive style for a moment or two, but slipped back into a second rate rendition of Mastodon again.

Songs like 'Hunter’s Crown' and 'Passage' simply sound way too much like Mastodon. I was even surprised at how close they were coming to sounding like it. The music is good and somewhat catchy, but it loses a great deal of credibility when you are basically copying some other band’s sound so closely and calling it your own. It is sad to see, but inevitably it happens as well.

So the word of the day for me, after finishing listening to Rising’s album, is clearly complete disappointment. If this band can keep the Sludge/Groove thing, and find their original voice with it - their fortunes will be looking up. Originality is always a real crowd pleaser and I hope that someday Rising finds that elusive yet needed part of their music.