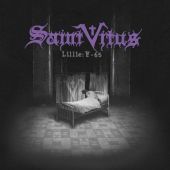 Los Angeles based Saint Vitus are one of the forefathers of Doom Metal (after Black Sabbath of course) and have been a inspiration to hundreds of bands over its thirty two years kicking our asses. After almost seventeen years since their last album, this larger than life metallic icon band has released its latest opus to a hungry and waiting multitudes of metalheads.

Originally formed in 1978 under the name Tyrant (not to be confused with the other four bands with the same moniker) banner, they changed their name over to Saint Vitus and a bonafide legend was born. With their first two classic albums that defined the whole Doom Metal sound and powerful live shows that set the standards for what would end up being this new genre. Years later after much strife and turmoil along with the passing of long term drummer Armando Acosta... it is clear that St. Vitus still kick ass!

From start to finish, "Lillie: F-65" is a pure Doom Metal classic, fitting for any metallists collection. From the pulsating slow motion assault of 'Let Them Fall' that seems to creep into your mind - to the album ending and mind numbing instrumental piece aptly called 'Withdrawa'l... Saint Vitus has re-shown the blueprint they have made which every last Doom band has followed at one point or another. As a concept album, it is amazing, but for a Doom album, amazing is not a strong enough of a word to explain it right.

You cannot dismiss what these metal veterans contributions to the world of metal over the years or not being aware of what may still be coming down the pipe from a band that seems to be as relevant as ever. They are a band that still can teach us a thing or two, and damn it, we need to fuckin’ listen for a change. They are Saint Vitus... know them!!