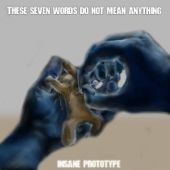 Industrial Metal is one style I have never liked. Its soul-numbing repetitive riffs and sub par creativity breeds a deep crypt of sheer boredom and breeds this lack of excitement in the music. If they were to change it up and go without the monotony of sounds, this genre might have something to offer up.

Hailing from Moscow, sole main member Dekeey (of the band The Phase) has put out a Industrial/Metal project called Insane Prototype. Its memorising riffs and hypnotic rhythms harkens back to Ministry in their heavier days.... yet boring is what this is in a nutshell. With uninspired heaviness and a very noticeable lack of creativity, this band puts sleeping pills out of work.

Every song has no atmosphere to it, repetitively beating you with its rolling music trying to make the listener like the music and failing badly. There is no true musicality to any of it, giving you a total of twenty four minutes of noise backed by a poorly programmed drum track that is without any substance(even the drum machine used is overtly there) and that is the good parts of it. I like some Ministry, but this is like listening to one drum track for days on end... AARRGGHH!!!

Insane is a part of this bands name, and it is insane to see this as good. They are heavy, but that never makes up for good old musicianship and creativity. I have not heard The Phase but if it is as ridiculously boring as this is Dekeey needs to quit and find a job digging ditches or something and abandon trying to create so-called-music and save us from a repetitive hell.

Insane Prototype... you mean insane that he Mr. Dekeey actually thought this was good music.