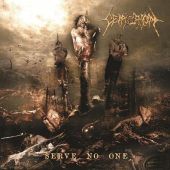 Poland’s Centurion rolled over me like a stampede of crazed bulls. From the first sound to the last second these guys did not let go and even though I did not enjoy our first meeting that much, I kept coming back to this record. First impressions can be deceiving I’ve been told, so to not to judge the book by its cover I listened to it over and over again. After a while album started to unravel itself and I’m glad I was so persistent.

First thing that hit me right from the start were drums. Fast, relentless and in your face, they were the forefront of the attack. Generally I would not have an issue with it but the problem that I see with this is that the loudness and intensity of the drums combined with the growling and snarling of the vocalist was too much up front and I couldn’t hear the guitars too well or at all behind them. Instead of listening to and enjoying the music as a whole, for the most time I tried to find the guitars, tried to find riffage that would differentiate the songs one from another. After many listening sessions it all came together and I thought I’ve found the way to select and divide the instruments –that’s when thought I was going to be able to listen to complete album but even then thickness of the drums overwhelmed and buried the guitars still, and at some point I had a thought that all songs sound the same. Fortunately, album’s sheer aggression, speed and ferocity are something that dragged me back to shred my nerves many times and I’ve learnt to like it the way it is. I find my favorite parts and combine them with the rest in my own way but the truth is - many out there will not even give it a second listen. There are many neck breaking riffs in there, great bass lines or kick-ass drumming, and after all the time I spent with this album I find them right away, but in my opinion all of them should be exposed much more and I shouldn’t be forced to look for them. At the end, after listening to the album over and over I hear great many good things thrown at me, and now I know that all I needed was patience and time to find them - but should that be the way? It is something to think about on the next album.

‘Ego Ultimus’, ‘Gateways To Condemnation’, ‘Cut The Throat’, ‘Thy Portal’ are just a few that got stuck in my mind thanks to either eerie atmosphere, memorable riff/chorus, rumbling bass or slower tempo crushing moment but ‘No One To Serve’ is an absolute gem that I played more than the others. As a matter of fact, that is the song that kept calling out to me and it is my favorite on the album. It has all elements and everything I’ve mentioned above, all perfectly arranged and played. I wonder if it was deliberate to have that one as a closer. I believe that if they go in that direction next time they will have a perfect album on their hands and bright future ahead of them. Hopefully it will not take another decade for those guys to complete another release. Rest of the songs is also quite good in their own way but unfortunately I don’t find them too original. There is an element/ingredient missing in them and obviously it is too late to fix the problem.

“Serve No One” is as solid as concrete but it could use some ingredients that would make it indestructible. Hopefully, they will take under consideration adding some ‘hardeners’ and including an intricate design in more of the songs. I believe such simple tweaks will make all the difference. For me it would make next album into a masterpiece. They’ve used some of those already but formula seems still a little off.