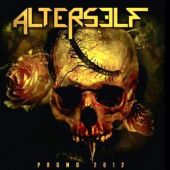 Greece has been putting out some metal lately, but it has not been very good. There have been a few bands that have blown me away, but that was just a small handful in the large scheme of things. The Greek Metal Gods now offering up a Death/Thrash outfit called Alter Self.

Upon listening to this little three track Promo EP, I found myself not really being vary impressed with this at all... underwhelmed would be word here. Alter Self played a brand of Death/Thrash metal pretty well, it seems that they followed a formula to a tee. They remind me of a Death Metal equivalent of Nuclear Assault at times, but they also sound like hundreds of bands that are fighting to be heard as well.

They offer up three tracks here... all of which sound exactly alike except for a few very scattered parts. Add in a terribly muffled recording and a vocalist who has very little range to his singing and it just seems that Alter Self is stuck sounding like everyone else with a bad recording.

It seems to me like these musicians have the tools but never learned how to use them in the correct way. They need to find their own versions of originality and get a voice with their music, and perhaps a well rounded engineer for the recording process - as it stands right now I can take them or leave them. Hope they find there voices fast.