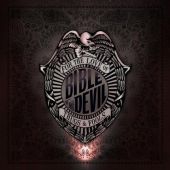 The line between the majesty of Heavy Metal and melodic precision of Hard Rock has always been thin - almost blurred at times and that can be good when certain things fall into place. You cannot go wrong with a good Hard Rock/Heavy Metal mix, if the band in question is good and knows their stuff. It seems like I have found that mean point, where the two sides blend into one monstrously good collaboration that blows your fucking mind... and has a cool named as well. Chicago’s Thunder Masters Bible Of The Devil is such one musical beast.

Thirteen year rock veterans Bible Of The Devil is sort of a Frankenstein musical monster all of its own. NWOBHM era metal mixed with parts of 70's Hard rock, Stoner Metal, some Modern Hard Rock and Biker Rock. This band makes music that is catchy yet heavy. Think of band that has such influences like is Iron Maiden and Judas Priest that was mixed with Thin Lizzy, Y&T and then accented with the sheer aggressive heaviness of the likes of Motorhead... and add in some attitude on top of that. Sounds great, huh?

I was hooked when the track 'Out For Blood' powered out of the speakers. Its bold power and very infectious riffs made liking it easy. Other tracks that made me sit up and take notice are the riff-tastic 'Night Street' and the rather surprising 'Anytime'. They each seemed to shape their own magnetic aura, while still bringing the whole album together.

Not too much to point out that is bad here, pretty much squat to try and rag on. This is just a remarkably mind blowing album from a band that has payed its dues in spades and now is reaping rewards. Bible Of The Devil is a band that is good, original and the most important thing - can kick your ass without trying.