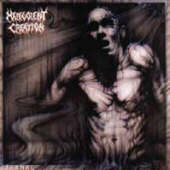 I can't believe I haven't reviewed this album yet, as it's had such a big impact on me in a lot of ways. I got this back in the days when the internet wasn't really around (1996 is when I picked this up) by going to my local metal record store, and just having the store owner suggest albums to me. This was one of the suggestions, and as soon as he started blasting it right there in the store, so I could get a taste of it (it was "Blood Brothers" that he had turned up to 11) I knew that this had to be mine.

I remember taking this home and just being blown away. "Blood Brothers" isn't even one of the greater tracks on here, and neither is the first track. However, they set the mood for the masterful dose of metal that's unleashed in the rest of the tracks. "Infernal Desire" is just so fucking good, I remember the calcium shaking off my teeth when I heard it for the first time. The riffs are very old school, no nonsense, head down, riff until your arms hurts kind of deal, and I miss it so much in today's metal it's ridiculous. Piles and piles of riffs, unrelenting, unforgiving, just sheer perfection. It's not all about just speed, either, as the breakdowns in this album is how breakdowns are *supposed* to be. Grinding, groovy, and sure to get your head moving.

The drumming is definitely worth noting. Up until this time, I was basically listening to a lot of Slayer and Sepultura, and while I loved those bands, I always wanted something a bit more. Dave Culross is that bit "more" - the guy is just spot on here, and I love his cymbal work especially - accentuating exactly the correct spots in the riffs, hammering them home. The way he uses that china and splash should be a lesson. While he's not pushing the musing to the absolute extreme without making it seem silly, he's basically displaying a tremendous amount of power blasting through these death/thrash masterpieces.

And make no mistake, that's exactly what this album is, a death/thrash masterpiece. I haven't heard another band or album that even comes close to this when it comes to mixing these two styles together. "Unearthly" is another prime example of the band set to just absolutely kill - the intro, the riffs that follow - everything just explodes like a M69 hand grenade. "Alliance or War" has one of the best intros ever, of course from Stanley Kubrick's "Full Metal Jacket", and the song itself boasts some of the best riffs on the entire album, riffs that you will remember for years to come.

I first got this album on cassette tape (remember those?) and side B is actually better than side A, which is a very rare thing. Side B just absolutely demolishes, especially... all of it. The last 6 songs are absolute fucking monsters. The title track will have you headbanging happily, "Hideous Reprisal" is just a groovy mosher of a song, and "Tasteful Agony" is probably my favorite track on the entire album. A sonic assault from start to finish, it really makes you wonder why it's so hard to find music these days with the same sense of passion and urgency found in this era of Malevolent Creation. This shit is just fucking flawless.

Jason Blachowicz vocals are pretty outstanding throughout - even the vocals are a perfect mix of death and thrash. Phil Fasciana and Jon Rubin just decimate with their riffs throughout this entire whirlwind of madness, and nothing more needs to be said about Dave Culross. He just makes the album. It just would not be the same with a shitty drummer or shitty drum parts. It just wouldn't work. He drives the band into the next level, and it's so crucially important to the overall sound and feel of the album.

Really, do yourself a favor and pick this up. Not having it already is pretty criminal in my books for any self-respecting death or thrash fan. This is a lesson in metal, this is how it's done, and this is how it's supposed to be.