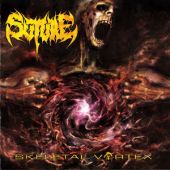 An unknown band to me until I received the CD via mail. They split up after this release in 2008, but reunited sometime this year so I'm assuming that they're working on new material. They are a 3-piece act that definitely has talent and shows promise to this genre of brutal death metal. It's a good thing that they reunited and I hope to hear them put out a new release this year.

The recording to this album is the pits, but the music is the strongest element here. A lot of time signature changes, blast beating, slower parts, mostly a faster up tempo songs but again it varies. Every song on here is good, just wish that the drums didn't sound so flat. That's the only other beef that I have with this album. The rhythm guitar has catchy riffs. Constant changes going from mostly tremolo picked guitar to chords galore that are amazingly well played out. Vocal-wise there is no variation really. Just low bellowing throat. It suits the music though as the riffs are really brutal. The solos are well played out with vigor. The guitars are the most noteworthy elements to the album. The blast beating galore reminds me a lot of Napalm Death's "Harmony Corruption" release. Just the riffs aren't as noteworthy as that album. Lightning like speed and songs that clock in at around 4-5 minutes in length.

The lyrical topics are brutal for the sake of being brutal. They sing about gore and blood. Not too much thought does it take to create words like this, but it suits the music well. I'd say that the guitar is most striking element to this album. A little reverb on the leads and some are wickedly fast and well played out. I'm sure that their break from the metal scene was yes 4 years but at least they realize that they have a lot to offer the community of brutal and brilliant musicians.

To brutal death metal lovers, Suture's Skeletal Vortex is a must have to your collection. Originality in the songwriting, brutality with the vocal onslaughts, guitar that's amazing and words that reflect that of the likes of Cannibal Corpse. An album that clocks in at about 45+ minutes and nothing here that is half assed in regards to the playing. The CD is a must have to all of you sick people who love underground music!

The Bayous of Louisiana are not quite known for blasting out some very intense metal (other than Black Metallers Goatwhore), but I have found one act that has crawled out of the muddy swamp to make their own metal stand with unabashed anger. This trio of death from the backwaters and eddies of the bogs seems to be one interesting act indeed.

Coming across as a combination of the power of Immolation, the growls and spat aggression of Dark Angel and the overwhelming brutality of some older Destruction... Suture is a force to be noticed in the Death Metal world. Heavy and harsh with nasty blast beats and eviscerating riffs and brutal vocals - Death Metal at its blood soaked best.

There are nine bloodied body skewered, aggression fuelled, stomach turning songs are what inhabit this CD... nine. From the eerie opening intro of 'Oblivion' to the guts-splattered ten minute opus 'Overseer To The End Of Days/Chaosuary', this band has shown just what Death Metal really has evolved into. Death Metal knows when to forge a new path, but still look back to the genre’s forefathers and use what was there as well.

I was not a fan of how the recording had been done for Suture, as it seemingly had been a rushed affair that did not take the time for doing it right by capturing the brute power they have, but thankfully that fact did little to snuff out Suture’s sharpened scalpel or quiet its viperous tongue. For three people, they have certainly layed the groundwork for global Death Metal supremacy they are on that path and almost nothing could stop them.