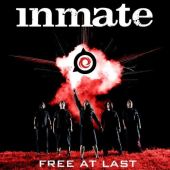 After doing a little bit of research I found out that Slovenia has an array of metal bands in almost every genre. For some reason I’m not familiar with any of them. Not a problem really, but I’m thinking about adding another point to my New Year Resolution List nonetheless. I think the only other band that I know from there at this point is Laibach (anybody remembers Morbid Angel remixes done by them), but musically they are a different universe. Laibach has been on my all time fav list for a long time now, so let’s see how these boys will do.

Inmate is a melodic death metal group and Free At Last is their debut album. Around fifty minutes for a debut may seem like a lot, but no worries here. Whole album is quite entertaining with lots of melody delivered by vocals, guitars, rhythm section or by some electronic samples. Sound on the album is very appealing and modern, with plenty of punch. It may not be the most original but I believe it’s something that will be adjusted and bettered in the future. Recording, mix, production and mastering deserve an honorable mention here because they are all done with highest quality. All aspects were taken care of so nothing is missed or put in the back. Songs on the album are interestingly diverse so we have some that are fast and heavy, some slow and crushing, some instrumental or mix of all those in one, but all of it very melodic so album is getting good points there but there is something that I believe brings the whole experience down few notches too many.

It’s repetitiveness. It almost seems that Inmate wrote a formula for themselves and they try to stick to it no matter what. Songs start with a good riff with good melody then rhythm section comes in, then verse and then we have chorus, verse and chorus and then repeat chorus few times too many. What happens musically I cannot complain because its good melodic death metal with plenty of compassionate guitar work and decent lyrics, but singing of the same chorus drives me crazy. It got to the point of me skipping second halves of the song because of that. I think that even best played melody and best written lyrics and chorus will get old quick if repeated too many times. It may seem like not much, but I’ve listened to the album many times and at this point I don’t even want to go back to it. Not for awhile at least.

Inmate’s Free At Last is a good debut and I feel that those guys will be on top of many charts in the future. I for one will be checking on them from time to time, because even though I complain a little - they did made me sing or shout with them and I was whistling some of the melodies, and that to me is a sign of good songwriting. They are very talented but they need to rework the formula a little bit and if they do, who knows? the whole world may be singing, shouting or whistling with them.