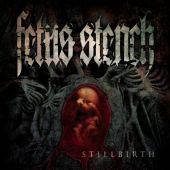 How many times a Death Metal band starts out by putting an album out there that can compete with the best? Not many! Fetus Stench did just that with their first album and nothing will be the same again, at least for me. “Stillbirth” is relentless, extreme, and intense and I loved it from the first note.

Powerful, meaty guitar sound combined with moshpit-friendly riffing (Cannibal Corpse) carries a Death/Thrash vibe with some groove and occasional lead, double base, blast and rumble of the drums (Blood Red Throne/Aeon drummer Emil) is simply exceptional and it’s a treat in itself, clanging of the bass and gut wrenching vocals (Morbid Angel/Hate Eternal) complete the attack and level anything that is still standing.

“Stillbirth” is one of those albums that don’t need to be taken apart. Everything is clear, crisp and tight. Guitars, bass, drums and vocals all are one impossible to stop entity that is as solid as a slab of steel. One that is made to crush, one that cannot be taken apart and cannot be messed with. It is brutal, technical, punishing and unstoppable. Excellent background to an execution or soundtrack to destroying something that’s beautiful. It is like a medieval battering ram made with care and passion, full of exhausting designs and majestic in its presence, yet made with one purpose and made to do only one thing: DESTROY!

Fetus Stench is conquering the throne, and as far as I am concerned - only few can stand in their way. “Stillbirth” is one of the most complete Death Metal albums I’ve heard in a while, and if they can keep what they’re doing or maybe raise it a notch, next time I see them leading the pack and many others will have to try to keep up. It is Death Metal at its finest and I’m not just saying that.