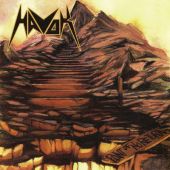 The snow and wind swept crags of Colorado hold beauty and majesty of nature in the wonders that are the mountains and it appears that Colorado also hold in its beauty some truly nasty metal. Thrash attackers Havok come from this amazing wonderland to pummel all of the fake metallers into the dust at their feet.

With a no nonsense sound and a bellyful of adrenaline fuelled attitude, this American foursome executed some of the best Thrash in the New Wave Of Thrash Metal. Old school riffing that comes with a new and dynamic twist to it is exactly what Havok offers up. The music is brutal and uncompromising, flowing from Bay Area predecessors, but it seems that it has been amped up a hundred fold... and then exploded out on to a awaiting world.

I have heard Havok’s "Time Is Up" last year, and it was amazing... this four song EP seems to be a good step... even though it happens to be a EP. The two original tracks are as nasty as ever, and seems to be melding Thrash with some Speed Metal as well. The results come across like if older Testament had way too many Red Bulls with their amphetamines. In other words, fucking brutal as hell with melodies that rip you a new one. The two covers offered here (Sepultura’s 'Arise' and Slayer’s 'Post Mortem/Reign In Blood') are classics that are done tastefully yet boldly thrashed out in their own brand of metallic insanity.

If you need to hear what the best of the new crop of Thrash sounds like, get this short album, and all of the back catalogue as well. I have to say that I think Havok would have been better off doing Sepultura’s 'Inner Self' for a cover, but 'Arise' was still good. I hate EP’s, but gotta say that this was pretty good. But I want a new fuckin’ album!!!

Nuff said my metal bros and sisters, now for a beer.