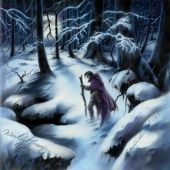 Panychida is a Czech term, literally meaning a memorial service for both the Orthodox and Greek Catholic churches, and is also the name for a Pagan Metal band from the same country. Let us see what they have to offer up for us.

Powered by the pagan side of things, this Czechoslovakian five piece plays seriously well put together Blackened Pagan Metal. Mostly bypassing the whole Viking/Folk Metal, maybe except for using some interesting instruments with great effect for accenting the brutal heavy riffs and rhythms of classic metal instruments. It is heavy, nasty and power filled with wondrous lyrics that are so very haunting and yet seem intriguing at the same time.

Half original songs with a mixture of live and cover tracks, Panychida’s odd half EP/special album powers over your senses with very outstanding musicianship and savage force. I was struck by just how well the songs had been crafted, noticing that the band had taken the time to make every last one of them. I love the original track ‘Return From The Woodland Journey, and I have to say the cover of Running Wild’s 'Black Wings Of Death' - needless to say that the others were very good, but these stood out for me.

For Pagan Metal, Panychida is on of the bands that really showcases just how this genre is to be done, while putting their own inspired spin to it all. They have not fully hit their potential yet, but is on the right track to make their mark. With an album this good by a band that is so close to what they can fully give, their next album will smoke the competition right out of the running.