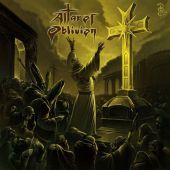 Type: Full-Length
Release Date: 2012
Label: Shadow Kingdom Records
Genre: Doom
1 Where Darkness Is Light
2 The Graveyard Of Broken Dreams
3 In The Shadow Of The Gallows
4 The Smoke-Filled Room
5 Sentenced In Absentia
6 Final Perfection
MetalBite on YouTube

These guys from Denmark impressed really me when I first got a hold of their demo, The Shadow Era, a couple of years back. Since then it's been a sort of twisted love affair with the brand of doom that borders on epic sounding, though I'm not so sure that's a fair tag here. What is epic anymore, anyway? Selected fancy syntax aside, the newest full-length from Altar of Oblivion is called Grand Gesture of Defiance and it delivers a heavy-handed slap to the face. As with any good doom, you don't feel the sting right off, but you know you've been hit.

While not so much Black Sabbath or Candlemass, Altar of Oblivion taps the down-tempo keg with a strong strain of stoner-like traditional metal tunes that are as engrossing as anything you may have heard and then some. Vocalist Mik Mentor has a voice that powers perfectly over the heavy chords of “Where Darkness is Light”, but the real treat comes with his brief solo intro in “The Graveyard of Broken Dreams”, which causes you to pay even closer attention to the band's messages within half-hour-plus of music. This track lays down the drop-tune chords in such a prime fashion that it's difficult not to become entranced by the subtle keys cascading over the musical waves like a cunning and pregnant steam pocket - it's perfect!

While the beauty of that little foray into airy ardor slowly wears off, the underlying message of AoO rears its head in the guitar-driven “In the Shadow of the Gallows”, a virtual death-dance with everything that can possibly be both morose and uplifting in the span of a 12-bar blues progression. While I know I must be feeling something close to melancholy due to Mentor's tonal command, I am strangely uplifted as the music just energizes my senses like no other doom in recent memory. The wondrous “The Smoke-Filled Room” starts off so serenely and without pretense or poisoned passion that I closed my eyes and found a quiet center so peaceful and fulfilling that I could hardly believe my ears at this early hour of the morning; the ease of the arrangement and that wholly legitimate opening that called upon early Opeth and some Dreaming Neon Black-era Nevermore was so terrific that I hit the 'back' button a few times after my first initial listen through (It is an homage perfectly timed to end before base tribute became stale infringement). “Sentenced in Abesntia” leaves traditional doom briefly behind and goes for the traditional 'heavy metal' sound with solemn moments of audio destitution, and it's all carried to a capital “T” in the lungs of Mentor, a vocalist that more people should be discussing at length. When the CD reaches its climax with “Final Perfection” I feel a sense of loss and, interestingly enough, strength within such an otherwise sorrowed track. Mentor's impassioned effort here is the very stuff legendary singers are made of, and you should hear it and decide for yourself. In this writer's opinion it was the perfect ending to a terrific album.

Altar of Oblivion is one of those bands that you might accept as terrific and with open arms, all the while hoping it's not some random fluke that the band is that saturated with ideas and great chord assemblies. After 35-minutes of a literal spinning room of emotional breaks and currents throughout the collective, and a growing discography of similar greatness, there's no doubt that the love is properly placed.

From the time I first heard the mighty Black Sabbath I fell in love with the slow dirge and massively heavy music that has shaped my life and made me who I am today. Doom has been my favorite style of metal, and my choice for playing in the various bands I have been in. One of the biggest breaths of fresh air I have heard in a long times comes out of Denmark, and has impacted me just like that certain self titled masterpiece from the godfathers of metal did when I was just twelve. It blew my mind.

Altar Of Oblivion plays grand and sweeping Euro-styled Doom Metal, with added American Doom influences. Think sort of in terms of newer Candlemass with St.Vitus textures... epic would been the word to use here. With heavy slow riffs, biting solos and a vocalist that sounds like a darkened Rob Halford mixed in with Messiah Marcolin... this whole album is interesting as hell.

The whole album just screams out to me, as it pulled me in to get lost in its heavy laments of bone crunching riffs that blare out, not to mention the acidic solos that seem to reach out and grab me. Each track is slowed to perfection, heavied up just right and released - but one track stands alone proudly. 'In The Shadows Of The Gallows' is a amazing seven minutes and eighteen seconds of the most amazing Doom and showcases one of the best at doing this grand style of metal.

Buy this album now!!! I hate to be like some sterotype writer, but I think that every metaller need to own this album. Doom fanatics especially will go totally ape with this album, but also I think any headbanger would appreciate this remarkable slab of work. So like I said - go out and buy this album before even opening the next beer.