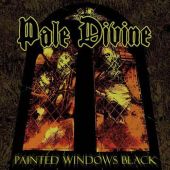 Experience... no matter what it is that you do or going to do, is a strong tool to have. One such experienced act has been around since 1995, and brings you metal that is a true product made by a band that has wallowed in the trenches of small clubs and other less inviting venues and has honed their craft like a well oiled military machine kicking their opponents asses. May I introduce Pennsylvania trio Pale Divine.

This American based band seems to be a sort of metallic potpourri. I hear some seriously impressive Classic Doom Metal, slowly pounding out with ingenious yet instantly catchy riffs while some Hard Rock of the 70's era looms to create this sort of colour that also blends in with a good shot of NWOBHM that is anchoring ever note. These guys rock hard, all the while never making anyone feel dumb.

One simple listen to such masterpieces as the slamming heaviness of 'Angel of Mercy' to the epic crush of 'The Desolate' - it is that rare blending of everything into one monster sound. The vocals are clean and full of emotions, coming for with the low paced fire that only a true vocalist could turn out. Reminding me of Trouble ex-vocalist Eric Wagner, singer Greg Diener takes this, morphing it into something that is expressive and fresh - while still pulling out your soul.

I have many other reviews that some people in the industry do not like where this band is going because of subtle changes from straight Doom into a sort of Doom/Stoner style with some faster parts, but I think this is exactly where Pale Divine should be. With songs like this, I believe that this band will make headway if they stay true to themselves. That is pretty much a done deal.