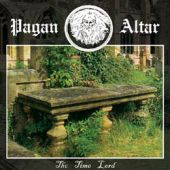 I remember back in high school when metal was not quite the big thing yet but still the music that was coming was calling to me like a siren song. Angel Witch, Saxon, Samson, Black Sabbath and other NWOBHM became my life. One band that was in there live in the late 70's, yet through some weirdness never got onto a record until 1998, was a underrated band from Brittain named Pagan Altar.

Doomy NWOBHM titans have been in the business for years yet they never seemed to get above that cult status that they are now enjoying. I found them to sound like a very unique mashing of St. Vitus, Old Ozzy era Sabbath and a twisted version of Saxon. They show that they are from the building era of metal and is not afraid to show it. Dark and rich ambiance with some brutal heaviness with old school fun, Pagan Altar shows the new metallers how to do it up right.

This EP is powerful and yet has a finesse that many bands try to develop over the years, Pagan Altar always seem to have it naturally. Each of the five songs are a true Doom gem, holding their own with heavy class. From the starting strains of 'Highway Cavalier' to the last pounding rhythms of 'Reincarnation'... the power and class of Pagan Altar comes through like a beacon in the Doom Metal gloom.

Old school Doom is a class act all the way especially when it is done by a band that was one of the ones that has seemed to have originated it all. For all who don’t know much of where metal had originated or those who need to have their memories refreshed a little - this is the album for you.