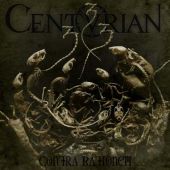 Type: Full-Length
Release Date: 2013
Label: Listenable Records
Genre: Death
1 Thou Shallt Bleed For The Lord Thy God
2 Crown Of Bones
3 Feast Of The Cross
4 Judas Among Twelve
5 Antinomian
6 The Will Of The Torch
7 Sin Upon Man
8 Damnatio Memoriae
9 Adversus

I was really amazed how technically brilliant this album is. There are strong influences of Morbid Angel on this album and I suppose this should be a favourite album of all MA's fans disappointed by their album starting with the letter "I". So if you feel that 'Existo Vulgore' and 'Nevermore' is not enough to satisfy your hunger for Morbid Angel sounds, you should grab this album as quick as possible.

The great opening track 'Thou Shalt Bleed...' gives great example of what these guys can do. The riffs with pull-ups are great. The overall music reminds of my favourite Morbid Angel albums (from F to H) and I have to say this is like travelling in time-machine and seeing what would have happened if Morbid Angel wouldn't decide to experiment that much with their music (which by the way would be a great loss to my collection, I really like "Illud...").

Thanks to Centurian I can experience both possibilities. And now maybe they will steal all MA's fans? Who knows... Anyway this album is not only in the style of Morbid Angel, it is Death Metal mixed with some elements of Black Metal as well and what is amazing to me I would never think that it would be able to hear sounds similar to MA and Mayhem on one album, but here it is and it sounds great. The most MA-stylized track, I guess is 'The Will Of The Torch' - brilliant track reminding a little of 'Prayer Of Hatred', but with a fresh approach with the same astonishing riffs and the drumwork at the level of Pete Sandoval. The one that is closest to Mayhem I would say is 'Damnatio Memoriae', but as with many good albums, the longer you listen to it you hear more, some bits of Hate (or maybe Behemoth), but also many other passages typical only for Centurian are amazing additions which make this album stand out as one of the best recordings in Death Metal field recently. Really strong position and a really good representation of Dutch death metal scene. It's definitely standing strong.