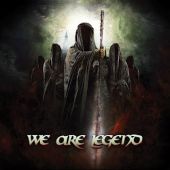 We Are Legend is a Power Metal band, coming from the home of Power Metal - Germany. Built out of ex- members of such amazing acts as Stormwitch, Goth act Coronatus and Abraxas, We Are Legend came together to build themselves a better Power Metal machine... and it seems that they have done so to a point.

With pulsating fire-breathing riffs and a wickedly generated sound that catches the ear of the listener while it confidently plows through your cranium with twenty full minutes of metal -We Are Legend seems to be serious. Power Metal mixed with some old school Thrash and a dabbing of Speed Metal and Classic Metal in spots - WAL seems to be a band out for metallic domination.

With four songs on here, you may think there is not much to offer... you’d be wrong. We Are Legend shows a wide spectrum of what they offer, and it seems there is more to this band that meets the eyes. There is riffs blasting every which way through the demo, yet the wild churning of the music is tempered by a few small piano intros that seem to not be out of place - and sets the stage for then metallic maelstrom to come. The songs are strong, but have a unfinished feel to it - as if the band had been rushed.

The four members of this act seem to be on the right path for their quest for metallic overlord status, but they are not there at the moment. If this sideproject stays together and naturally goes to the next level, they will be the band to beat. It is a good, strong album and no one can take it away from We Are Legend.