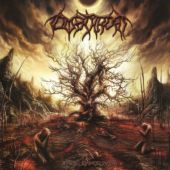 If there’s one thing this world doesn’t need more of, it’s brutal death metal bands. Having been a fan of the genre for more than half of my life, it takes quite an effort to get these old ears interested in more than two songs back to back. The genre as a whole has been populated with half assed bands formed simply to be “brutal”, and let’s face it, most of them don’t bring anything new to the table. Not only that, but the songwriting is boring and uninspired.

Thankfully, I can’t say the same thing about Tombthroat. I have no idea how I stumbled upon these guys, but I’m glad I did. And despite having somewhat of a silly band name, the music on display here is pretty superior to a lot of what’s being released today.

It’s obvious that these guys can play. Always a big bonus. It’s also nice that they’ve brought back traditional, old school death metal riffs. Unlike say, Putridity – who’s riff patterns seem to be chug, chug, squeal, chug, chug, sqeal for 30 minutes, these guys (guitarists Björn Köppler and Peter Hildenbrand) have thankfully taken the time to conjur up some great, memorable riffs. Add to that the superb drumming of Alexander Wenz, and already more than half the battle is won.

The vocals of Ralf Keitel are meaty and lack nothing in the power department and sounds like cross between Glen Benton and old Chris Barnes – you know, back when he could sing. The bass? Come on, it’s a death metal album – the bass is usually lost on these things. But amazingly, it cuts through here quite nicely, and for the most part, you can hear bassist Volker Rietz following the riffs quite nicely.

Lyrics? I really don’t care. I stopped caring about what death metal bands sing about a long time ago. I’m fairly certain that death, suffering and pain are a part of it. As far as I'm concerned, they're just another instrument. And here, they're used well so I can't fault it.

And while this album isn’t anything ground breaking (and after all, what is?) it’s certainly satisfying when you just want some quality death metal. Songs like “Psychological Disharmonism”, “Eden Apocalypse” and “On the Gallows” are packed with juicy riffs and spectacular performances by all band members.

Another thing to note is the downright awesome production and mix this thing has. The guitars slice and grind like champs, and the drums are loud and clear, with a drum sound I personally just love. The snare especially sounds nice and meaty, making the blasting here that much more satisfying.

Overall, a very solid performance. So solid in fact that I am now interested in their back catalogue. It will be interesting to see how this band have progressed over time. And they’re from Germany. They should tour with Defeated Sanity or something. Now that would be a fucking mosh pit to remember.