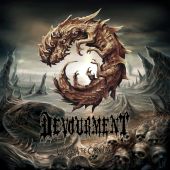 To start out, this album is heavy and doesn’t sound like try-hard shit, yay! The guitars are very heavy and grindy, similar to Molesting the Decapitated guitar sound. Doesn’t really sound quite like Molesting..., but it’s on the same scale. The guitars here actually have some foundation and don’t sound weak and boring. The drumming is better. Eric Park’s playing is more organized, consistent, and proper. Throughout the album he throws out some cool fills, snare hits, and patterns, and it makes the songs more enjoyable. His playing isn’t struggling or unpleasantly random like the last record, it’s very much improved on this record. I don’t really know what to say about the bass, as its buried underneath the guitars, but I’m just glad it’s here to support the guitars and maintain the heaviness in this record. The vocals still aren’t really that good but they’re WAYYYYY better, a bigger step up. The instrumentation and effort are obviously better in this album; a really good improvement.

Although the instrumentation has been improved, it doesn’t make the album great or anything. This instantly gets a higher rating in comparison to Butcher the Weak for being significantly better, but this album also has some flaws. The songwriting could be better. Most of the songs are underwhelming and boring and lack brutality and energy. Only a very few of these tracks are memorable and catchy, most of the songs on this album are easily forgettable and snoozy. The guitars, although they are heavy and all, it’s pretty bland and sluggish too. Don’t get me wrong, this guitar is better and sounds cool, but a lot of the time it sounds pretty bland and stale. I don’t really have anything bad to say about the drums. Sometimes the snare does sound weird but that’s about it, drums are aight. The vocals. Mike is a shitty as hell vocalist, one of the worst in the genre; and he should've never been the vocalist of this band in the first place but his performance here is tolerable and better than the abominations he was squealing out on Butcher the Weak. He’s starting to form into a better and more serious-sounding brutal death vocalist. He’s way more guttural and deeper and doesn’t sound like pure crap, but he still sounds pretty amateur, sloppy and unorganized. Better job but still not fulfilling.

Also just wanted to throw out that this album is basically Butcher the Weak and Molesting the Decapitated mixed together. It has the same songwriting style and ideas like Butcher..., but has the atmosphere, sound, and heaviness like Molesting.... This paragraph doesn’t affect this album at all; just wanted to say because this is what I see in this.

The artwork is okay, but it’s not really all that great, the main color of the cover is gray – this album is literally the color gray in musical form. When you listen you’ll see what I’m saying? Nothing about this release has a WOW factor or anything, and it doesn’t really have much worth aside from it being better than the last album and having a better guitar sound. Unleash the Carnivore isn’t anything special really, but what we got here is an improvement; a pathway to redemption. This album isn’t amazing and shouldn’t be considered that, but it’s definitely better than the band’s previous installment. More work has obviously been put into this, but it was done poorly for the most part. Better songwriting would’ve made this album really good, that’s for sure. I would never recommend this album to anybody as I hardly listen to this and it’s not that good of an album in general, but if you wanna hear some better Devourment and cleanse your ears from the atrocities of Butcher the Weak, here’s your album. Pretty much the only time you’ll be listening to this album is if either

1. You've listened to too much of Devourment's other stuff, so you're just listening to this for fun.

2. You're just trying this album out to see if you'll like it.

Not a terrible album, but easily a throwaway and forgettable, its only good for being better than the previous album.

Main pros of this album:
*Significantly better than Butcher the Weak; an improvement.
*Heavy sound/atmosphere
*First 20 seconds of Unleash the Carnivores
*All of "Fed to the Pigs"
*1:47-2:15 on "Incitement to Mass Murder" (mainly the drums, but this section of the song is amazing)
*Better/more organized drumming
*The cool occasional drum fills and snare rolls/hits/etc Eric throws in there
*First 28 seconds of "Over Her Dead Body"

I cannot see why there's so many bad reviews for this album. Maybe it's the vocals because the music is simply sick! It's a well worth listening for 35 minutes. The guitar riffs are what've stuck to me the most. And the brutality of this record. People have to understand that bands change or evolve. Sometimes it's for the better or for the worse. To me, this is the only Devourment I'll listen to, for now at least. They've got enough brutality in this release than any one that I've heard of lately including Dying Fetus. They're not super-fast when it comes to songwriting, though there are some moments when there are blast beats.

I think the vocals are the downfall of this album, they're too burly. But that's the way they wanted it and it meshes with the tunes. Just don't try to decipher what is being said, you're better off sticking to the music. A lot of it is slow and just downright heavy! When I first listened to this, I hated it! I thought "there's no way I can get into this." I was mistaken. I'm now hooked on it. It's everything, the music, vocals, drums, and duration for each song. They average an approximate 4-minute songs in length. The production quality is solid, too. I like this band. Things to look for in this album are the dynamics of what's going on here. This band thrives on slow heavy riffs and a lot of palm muting (for you guitarists). Yes, the songs are pretty slow, but it's appropriate. They're not a technical death metal band. They fall under a different category.

I thought it was good the more I listened to it. Everything seemed to fit together. The music, vocals, drums and production. One thing they're lack are guitar solos, there aren't really much if any of those. But what to look for on here are the heavy and brutal music they have to offer. I don't really have much criticism to say here. They rock in my opinion. Nothing on here is average or boring. I think if you're looking to hear some brutal stuff, Unleash the Carnivore is where it's at! I would urge you to get a physical copy so that you can play it any time. You need to hear this!