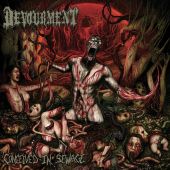 Devourment started off with such an amazing and flawless debut, but after that debut...YIKES. They've fallen down pretty low and lost their true style. I mean seriously, how could they put out something as amazing as Molesting the Decapitated and then follow up to that album with Butcher the Weak, and then follow up to Butcher with Unleash the Carnivore??? It's such a letdown and it makes no sense. But thank fuck they've resurrected their discography with Conceived in Sewage. Finally, something that's actually planned out and well-written since Molesting.

Let’s start off with the album art, this is the most brutal art they've had since (again), their debut album. Most of the time, brutal cover art makes for an amazing album, and this is for sure the case with this album. You can already tell Devourment has finally made a great comeback that probably won’t disappoint, and it doesn't disappoint at all! It opens up with 'Legalize Homicide', which if you ask me is THE PERFECT album opener. Seriously, the song starts off with a punishing low growl with a sexy riff and a solid drum beat following right behind it, then here comes the great parts, you get all the double kick drumming you can get in a song, it’s awesome. Every single song on this album is great, nothing is boring, nothing gets old; it may not be AS fast as their early material, but it still crushes hard, seriously. On this album they focus more on the heaviness of the music, and not SO MUCH on the speed, but it’s still pretty fast as it should be when it comes to brutal death metal. There's 9 total tracks on this album, the 5th one being a separation song which divides two halves of the album, which is actually quite pleasing. 'March to Megiddo' describes itself perfectly, when you listen to it, it's like you're in a war, moving forwards on to new battleground, the part 2, which is the second half of the album.

I'm using "war" as a metaphor, to describe the album and it's brutality.

First 4 tracks - part 1 of the war
'March to Megiddo' - moving on to the new area of the war, the second part.
Last 4 tracks -continuing the brutal war

Again, that middle track 'March to Megiddo' is a great transition in the middle of the album, it's a great instrumental that sets up the perfect atmosphere necessary for this album; brutal and continuous, won't end until the time comes. The guitar tone is perfect, it sounds very slippery if that makes any sense. The guitars sound similar to the guitar sound on "Butchered at Birth", those who have listened to this album and "Butchered..." back-to-back know exactly what I'm talking about. The guitar tone is pretty acquired to achieve, and the way they sound goes greatly with the drums, especially since the snare is solid as hell while still continuing to sound clanky, which is just amazing, and the bass drum is solid bassage, the drums and guitar are best friends on this album. The bass guitar is great as well. It's semi-present, meaning that most of the time the guitars bury the bass playing, but if you focus hard enough you can hear the bass, and there are also sometimes where you can fully hear the bass on its own, like at the beginning of a song, or a certain pattern in the middle of a song. The bass is highly needed on this album especially since the guitar wouldn't sound all that amazing without bass to back it up, imagine this album with no bass, jeez, that'd really suck.

And finally, Mike's vocals aren't complete try-hard ASS anymore! Mike can do vocals, but he DEFINITELY isn't an amazing one. Ruben Rosas is their best vocalist, it's seriously extremely sad that he switched to guitar from vocals, Ruben would've been amazing doing vocals on other albums, and could've possibly affected the band's musical ability in a good way. But no, Mike decided to do vocals, which was never a great idea in the first place, dude just should've stayed on bass. Anyways, as I was saying, finally, Mike's vocals are at a decency on this record, it's simply just brutal, low, heavy, and guttural, just as they should be; a mixture of vocals, not just one EXACT style of vocals the entire album, the vox always should have some variety, even if just a little bit. Boring vocals makes for a big turn-off on an album that could've been so much better at the start. I'm glad he tried to be somewhat better on this album, the way he does vocals on this record perfectly matches the music, so nothing really sucks. I mean, his vocals on Butcher the Weak and Unleash the Carnivore didn't COMPLETELY suck, the vocals on Conceived... compared to Butcher the Weak and Unleash... are obviously different in style, but at least here on Conceived in Sewage they're more organized and developed and written good for this album. Great job, Mike, this is finally your vocal peak!

The only downsides of the album is that the songs get kinda boring sometimes, and the vocals drag on sometimes, and also, this is one of those albums that you have to be in the mood for, or else you won’t enjoy it as much as you could. This isn't just an album you can turn on and listen through in one sitting, you'll like it at first, but after you've become known with the album, it takes a little time for you to fully appreciate it.

Overall, with this album, the band saved their discography from being a complete total flop! They made a decent album that has good songwriting, flows greatly, all instruments sound great and fit with the rest of the instruments greatly, good cover art, etc. not bad at all. Complete total heaviness, a good comeback for the band to show you that they haven't totally fallen. A good album, but not an amazing one. Nonetheless, finally some more decent Devourment material after all these years!

If you want to save yourself and re-organize your mind after listening to Butcher the Weak or Unleash the Carnivore, do yourself a favor and put this shit on.